After attending this year's Golden Globes with a stunning (and statement-making dress), Puerto Rican actress Gina Rodriguez is making headlines again. But this time about her culture. In a cover story interview with Cosmo for the February issue, the 34-year-old opened up about love, anxiety, but most of all, about being a Latinx actress in Hollywood. 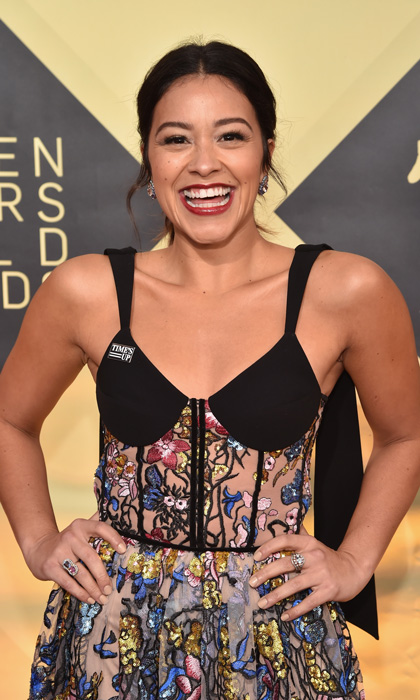 In her cover story for Cosmopolitan magazine, Gina Rodriguez reveals the importance of Latinx stars in Hollywood

“I felt very alone growing up. I didn’t feel represented. I didn’t feel a part of the conversation," she revealed. "And if you see yourself projected, you believe you are worthy, valuable,” the Jane the Virgin actress explained. And Gina's Hollywood journey shows how more and more Latinx stars are taking the lead in the industry.

The dark-haired beauty's next project, Miss Bala, has her in a starring role, playing a Mexican-American woman who finds herself entangled with a deadly cartel. The film's cast and crew is predominantly Latinx. “When Holly­wood reimagines films, they have historically whitewashed them," she told Cosmo. "In this case, the American girl is me, a Latina born in this country. I find that revolutionary.”

In addition to acknowledging the importance of Latinx representation on the silver screen, Gina stresses self-love and care -- not justu for herself but for the millions of girls who can identify with her experiences. “I finally love my body. I let go of the anxiety and the fear of not looking beautiful," she said. "Because it’s not about the picture. It’s about the fact that I stand on this cover with every Latina who wished she saw herself reflected. Because it’s not my face—it’s the 55-million-plus girls who are like, ‘Holy sh*t! We belong.’"