George Clooney and Amal were the epitome of Hollywood glamour as they attended the Suburbicon premiere at the Venice Film Festival. The Saturday premiere marks their first official outing since welcoming Alexander and Ella on June 6. The 56-year-old, who directed, co-produced and co-wrote the film alongside the Coen brothers, looked dapper in a black tuxedo while his wife stunned in a lilac Versace gown. 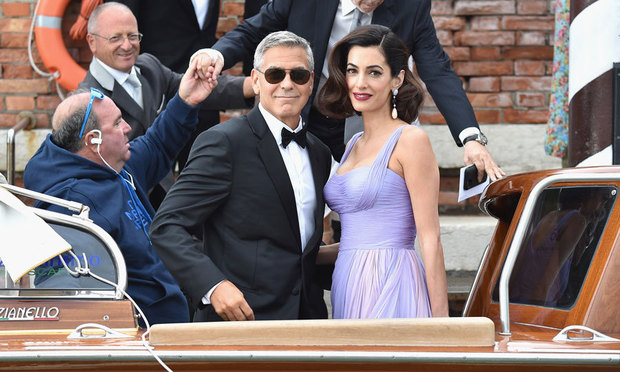 To complement her look, the 39-year-old wore her hair in a faux bob and a more dramatic makeup look done by Charlotte Tilbury. The new mom accessorized with pearl drop earrings. Though this is their first time back in the spotlight, the couple, who married in Venice three years ago, have been enjoying dinner dates around the city prior to the September 2 carpet. On Friday, Amal wowed in a sparkly $3,995 Missoni strapless dress for an evening out at Ristorante Da Ivo. Once again, Charlotte, who also did her makeup on her wedding day, did her glam along with hairstylist Rod Ortega. 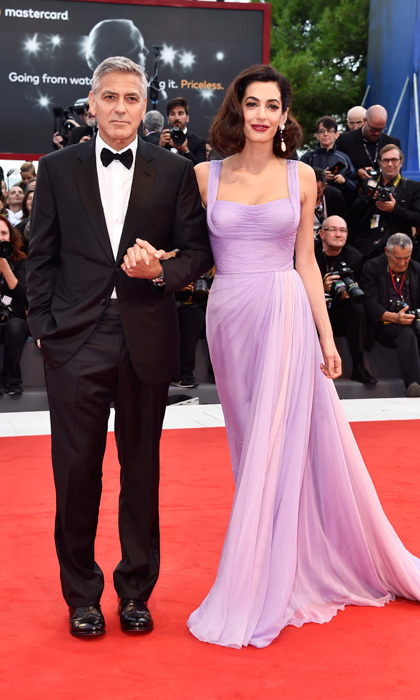 George and the human rights lawyer have also spent time dining with Suburbicon star Matt Damon and wife Luciana. The good friends sat down for a joint interview with Entertainment Tonight on Friday where the first-time dad opened up about his twins’ personalities with some side comments from the Jason Bourne star. "They start out with a personality right off the bat," George admitted.

RELATED: ALL THE COUPLES' FRIENDS THAT OFFERED BABY ADVICE

He then turned to his buddy Matt and joked: "[Alexander] is a thug already. You saw him. He's a moose! Literally, he just sits and he eats." The 46-year-oldstar agreed, saying: "He looks like he could bounce right now, some place in Hollywood.” George lightly chimed in: "Like, checking IDs on the way into the nursery.” As for his daughter, George shared, "She's very elegant, and all eyes. She looks like Amal, thank god." Matt and George talked about his twins in a joint interview Photo: WireImage

Prior to the festival, Matt raved about his good friend. “Sure, he’s changed,” he told The Hollywood Reporter. “He’s evolved, but he’s the same in a lot of critical ways. In all the important ways, he’s the same; he’s got a huge heart, he’s incredibly loyal, and he’s really, really smart.”