First daughter Sasha Obama got some serious R&R over the weekend during a trip to Miami. President Obama and Michelle Obama's 15-year-old daughter and a group of friends, including Vice President Joe Biden's granddaughter, Maisy Biden, soaked up the sun and hit up some of the city's hotspots. 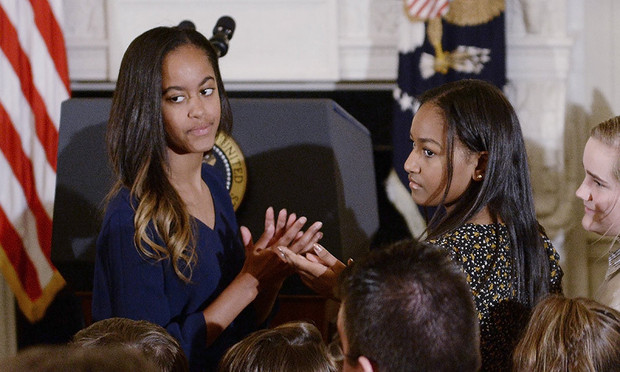 On Saturday night, Sasha and Maisy were spotted at Miami restaurant STK in South Beach. Sasha and her squad spent the evening dining and listening to music spun by DJ Danny Stern.

During her weekend away, Sasha frolicked in the sunshine and showed off her true patriotism in style. Malia's younger sister was spotted keeping it cool and on trend in a blue and white star-patterned bikini, which she covered up with a denim frock.

Sasha added some extra flair to her look with aviator shades and a baseball cap with Drake's OVO logo. The Toronto-born rapper caught wind of Sasha's style choices and gave her a shout out on his Instagram. "Style popper," the 30-year-old Hotline Bling rapper captioned the photo showing Sasha in MIA wearing the logo cap.

The Bush twins give some advice to Malia and Sasha

Ahead of her trip, Sasha was noticeably absent from her father's farewell speech last week in the family's home state of Illinois. During her final appearance on the Tonight Show with Jimmy Fallon, Michelle explained her daughter's absence. 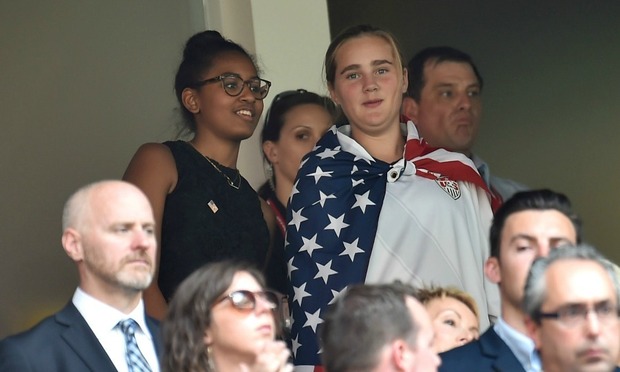 "She had a final," the First Lady, 53, told the late night host. "And it's like, 'You know the Obamas, girl. Sorry!' You have to take your test. You can say goodbye later."

Not forgotten in his speech was Sasha, who earned an emotional shoutout from her father along with her big sister. "Malia and Sasha, under the strangest of circumstances, you have become two amazing young women," Barack, 55, said as Malia and Michelle wiped away tears. "You are smart and you are beautiful, but more importantly, you are kind and you are thoughtful and you are full of passion.

"You wore the burden of years in the spotlight so easily. Of all that I have done in my life, I am most proud to be your dad."