Battling it out for Broadway! Neil Patrick Harris challenged James Corden to a Broadway riff-off during an appearance on The Late Late Show on Monday. "Your silly jokes can wait, Corden. We have a score to settle and it's about Broadway," Neil told the late night host. "I see you going around, hosting the Tonys, acting like you're the only TV star who can sing Broadway show tunes. Some of us, dude, have actually won a Tony." 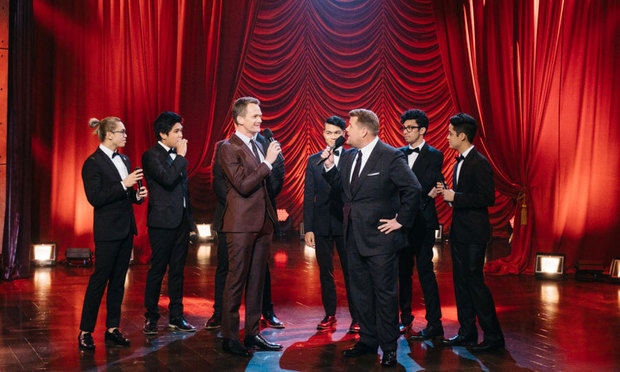 James reminded the How I Met Your Mother alum that he too has a Tony award, to which Neil responded, "Yeah, for a non-singing role... burn." At that point it was game one for the Hollywood stars. The two faced off in a battle joined by the a cappella group, the Filharmonic.

James and the Series of Unfortunate Events star performed an array of Broadway hits including On My Own from Les Misérables and All That Jazz from Chicago, before calling it a truce to perform My Shot from the Tony-winning musical Hamilton. Neil's passion for the music clearly got the best of him. Following a commercial break, the actor revealed that he split his pants. "When I went down on my knees there, I had a nice wardrobe malfunction and split my pants from my a-- to my knee,” the father-of-two confessed. “I left it all on the stage for you.”

WATCH THE EPIC RIFF-OFF BELOW