Could the Lord and his lady Kourtney Kardashian be getting back together? The 36-year-old Keeping Up with the Kardashians star shared a silly Snapchat video with her fans, featuring her 32-year-old ex Scott Disick. In the clip, the estranged couple are sitting next to each other, when Scott decides to make an announcement.

"So umm, we wanted you guys to hear it first," Scott says to the camera. "We are getting back together." Before the end of the 10-second clip, Scott leans in to plant a kiss on Kourtney who leans away and laughs, "No!"

It's good to know the two still have a sense of humor. Kourtney and Scott called off their relationship in July of 2015, following Scott's continuous trouble with alcohol. The duo, who are parents to Mason, 6, Penelope, 3, and Reign, 1, decided that although they are no longer romantically involved, they plan on both being around for their children.

CLICK BELOW TO SEE MORE OF KOURTNEY AND SCOTT 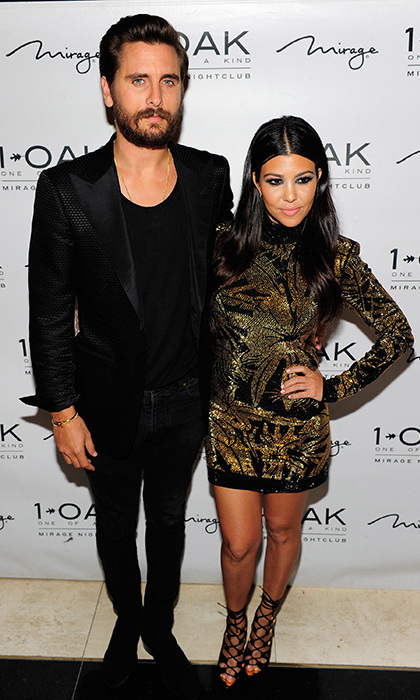 Kourtney and Scott broke up in July 2015 after almost 10 years of dating Photo: Getty Images

This isn't the first time that Scott has been seen out with the family in recent months. Earlier this month, Scott was featured on Kourtney's Instagram in a picture posted from Rob Kardashian's birthday dinner. In the photo, captioned "Fams", Scott is seen standing behind Kourtney and in an embrace with the birthday boy and his younger sister Kendall Jenner.

Also in the picture are Kourt's sisters Kylie and Kim, and her brother-in-law Kanye West.

During her appearance on the Ellen DeGeneres Show, Kourtney opened up about her and Scott's current status. "I feel like every day is different, but we're totally getting along," she shared in her first post-breakup interview. "Like, we have three beautiful kids together... But, you know, he's family. He'll always be."