A moment of silence for Victoria Beckham's heels. The fashion designer has officially traded her signature footwear for flats. In a new interview with The Telegraph, the former Spice Girl, who was known for her sky high stilettos and little black dresses, revealed that is not the real her.

CLICK TO VIEW THE CRAZIEST PLACES VICTORIA HAS WORN HEELS 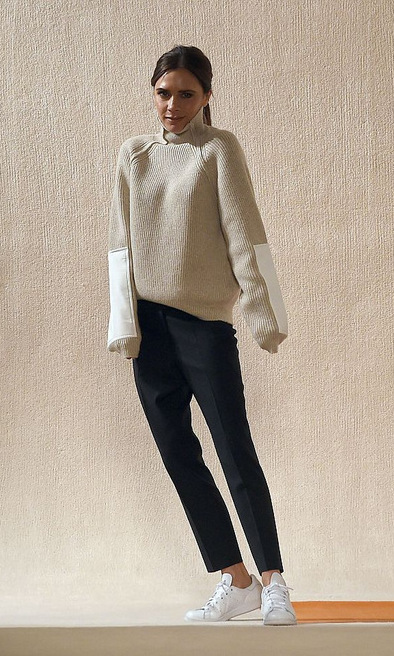 Victoria added, “I think people saw the real me when I came out [at the end of her NYFW show] in a pair of men’s trousers, a roll-neck and trainers.”

The bombshell revelation comes years after David Beckham’s wife admitted she couldn’t work in flats. Back in 2008, the fashionista told U.K.'s GMTV, “I just can't concentrate in flats.” At the time Victoria said, "I'd love to go to the gym but I can't get my head around the footwear."

However these days, she believes that “clothes have to be simple and comfortable.” Despite dialing back her wardrobe to comfy and simplistic pieces, the mother-of-four continues to turn heads everywhere she goes. And Victoria's young daughter Harper Beckham is already picking up on her stylish mother's fashion cues.

The designer recently revealed, "Harper is incredibly chic and wears some incredibly sweet things.” She continued, “[Harper’s] a very stylish little thing with her own sense of how she wants to dress. She tends to choose exactly what she wears herself.”