Before The One Where They (Almost) All Reunite to honor veteran sitcom director James Burrows on February 21, we’re taking a look back at your favorite friends: Ross, Joey, Chandler, Monica, Rachel and Phoebe. The famous ‘90s cast, which included Jennifer Aniston, Courteney Cox, Lisa Kudrow, David Schwimmer and Matt LeBlanc will come together for the two-hour special on Sunday, sans fellow co-star Matthew Perry, to celebrate the legendary director. 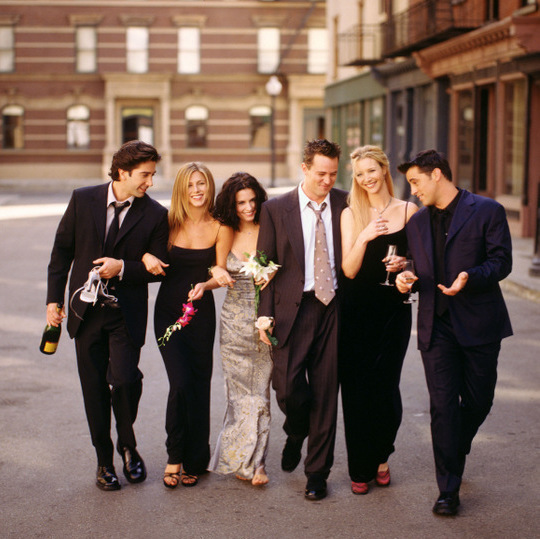 From "Smelly Cat" to Unagi and the infamous “WE WERE ON A BREAK,” we’re taking a stroll down memory lane with some of the most iconic Friends moments.

1. The One Where Monica Gets a Roommate (Episode, 1 Season 1)
How could we NOT include this one. This is where it all started and we were introduced to our new set of best friends. No one made an entrance more grand than Rachel Green (played by Jennifer Aniston) in a wedding gown looking for her old pal Monica Geller (Courteney Cox) at Central Perk. The spoiled daddy's girl enters the real world, cutting up her credit cards and realizing she is not a "shoe." This was also the beginning of Ross’ (David Schwimmer ) undying feelings for the runaway bride, as he referenced at the end, one day possibly asking her out. (If they only knew what was to come…)

2. The One Where Ross Finds Out (Season 2, Episode 7)
Good things come to those who wait, and in this episode we finally got the first taste of a relationship between Ross and Rachel after he listens to a drunk voicemail from her proclaiming her interest in him. In the end, after a season of waiting for the two to finally get together – despite the existence of the paleontologist's girlfriend, Julie, who he met in China – they share a kiss at the gang’s hangout.

3. The One With the Prom Video (Season 2, Episode 14)
The ultimate throwback! From flashbacks of an overweight Monica getting ready for the prom with a pre-nose job Rachel, and Ross’s mustache and keyboard, there’s no denying the series’ iconic episode. Besides, it is the group’s old prom video that brings Ross and Rachel finally together with Phoebe Buffay (Lisa Kudrow ) exclaiming, “He’s her lobster.” (Giving us all a new phrase to apply to our own love lives!)

4. The One Where Eddie Moves In (season 2, Episode 17)
Phoebe is discovered by a record producer who wants to turn her song, "Smelly Cat," into a music video. When the video comes out, it turns out another woman’s voice was dubbed in. Phoebe's explanation? "The producer people, they said she doesn't have, like, the right look or something. You know? I mean, it's like, she's like one of those animals at the pound who, like, nobody wants 'cause they're not pretty enough. Or you know, like... like some old dog who's just kind of like, stinky and.... Uh! Oh my God, she's Smelly Cat! Oh! Oh, that song has so many levels.” Yes it does.

5. The One Where No One's Ready (Season 3, Episode 2)
We’ve all been in that situation waiting for friends to get ready for an event, however what we’ve yet to experience is a battle over a chair, which ultimately ends with a pal – or in this case Joey Tribbiani (Matt LeBlanc) – wearing all of our clothes "commando" and stealing the cushions of a chair... or as Chandler Bing would say, “The essence!”

6. The One With The Rumor (Season 8 Episode 9)
In short, this is the one where Brad Pitt made a guest appearance – oh and he expressed his deeply-rooted hatred for one Rachel Green, played by then-wife Jen Aniston! Brad's character also confessed that he co-founded the "I Hate Rachel Green Club," of which Ross was a member.

7. The One With the Embryos (Season 4, Episode 12)
Challenge accepted. Rachel and Monica square off against Joey and Chandler in a game show hosted by Ross to see who knows each other better. After being asked what Chandler Bing's job is (does anyone actually know?), Rachel shouts "He’s a transponster!”, ultimately losing her and Monica’s apartment to the boys. Meanwhile, Phoebe becomes impregnated with her brother's embryos. Casual day for this group of friends.

8. The One With All the Cheesecakes (Season 7, episode 11)
Love has no boundaries, and that extends to food. Rachel and Chandler become obsessed with a cheesecake that belongs to one of their neighbors. The obsession becomes so real that the two are willing to eat the cheesecake off the floor, which they do! Rachel says, “We are dessert stealers! We're living outside the law!”

9. The One With the Holiday Armadillo (Season 7, Episode 10)
Leave it up to Ross to introduce us to a new legendary Christmas figure, the Holiday Armadillo. Wanting to teach his son Ben about their Jewish heritage, Ross dresses up as Santa’s friend, who represents “all of the southern states and Mexico!”

10. The One With the Thanksgiving Flashbacks (Season 5 Episode 8)
In another epic throwback episode, the gang exchanges past terrible Thanksgiving stories, which included the time Monica accidently severed Chandler’s toe because he “called her fat.” All is forgiven by the end when Chandler inadvertently tells Monica he loves her, while she has a turkey on her head.

11. The One Where Everybody Finds Out (Season 5, Episode 14)
While Monica and Chandler try to continue keeping their blossoming relationship under wraps, they are unaware of the fact that Phoebe and Rachel are onto their secret. In an effort to get the couple to admit to their romance, Phoebe attempts to seduce Mr. Bing on a date, though at that point Monica fights fire with fire.

12. The One With the Proposal (Season 6, Episode 25)
After Chandler’s proposal to Monica goes awry, the brunette struggles to decide between him and her old boyfriend Richard. In the end, Monica ends up surprising Chandler with a candle-lit proposal of her own in the couple's apartment.

13. The One With Unagi (Season 6, episode 17)
Unagi or “salmon skin roll.” Ross decides to teach Rachel and Phoebe the Japanese concept of unagi after they take a self-defense class. Let’s just say Ross gets schooled with his own lesson.

14. The Last One (Season 10, Episode 18)
It had to end sometime, and sadly it did with "The Last One.” Rachel's flight to Paris hits a few speed bumps after Phoebe calls her in attempt to delay the flight, citing problems with the plane's "left phalange." Ross, eventually, after hitting the wrong airport, is able to catch up with Rachel, where he professes his love for the mother of his child. Though much to Ross' dismay, she boards the flight. Upon returning home, Ross finds a voicemail from the Paris-bound passenger who is wanting to get off the plane. Spoiler alert, Rachel got off (rejoice)! The episode culminates with the all of the friends, and Monica and Chandler's twins, in tow, heading to their favorite place, Central Perk.

15. "WE WERE ON A BREAK"
Remember when Ross used the defense that he and Rachel "were on a break" as his excuse for sleeping with Chloe, the copy girl? Well, that phrase was brought up an AWFUL lot on the series making it one of the show's most iconic quotes.