Miranda Kerr has a new crush, Selena Gomez! The 32-year-old model took to her Instagram to show the pop star some love and congratulate her on her latest magazine cover.

"Love this @selenagomez," she captioned the image of the 23-year-old's "Hands to Myself" singer's latest cover of W magazine's March issue shot by photographer Steven Klein.

Selena and Miranda have had a close friendship despite being friendly with each other's exes: Orlando Bloom and Justin Bieber. The girl duo were spotted having some quality girl time together during last month's UNICEF event while promoting Louis Vuitton's #makeapromise campaign. 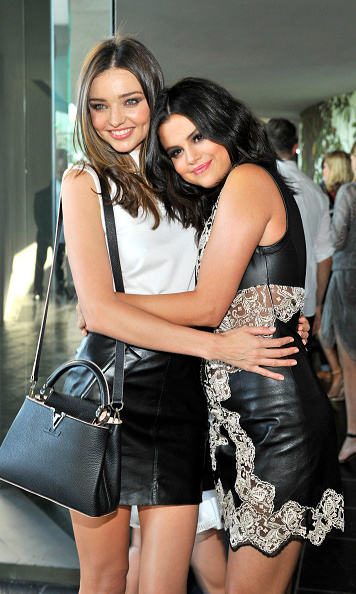 Selena and Miranda hung at the Louis Vuitton Cruise Resort show in May 2015 Photo: Getty Images

On the cover that had the mom-of-one gushing, Selena wears creme-colored bikini bottoms, under a crocheted cover up that shows off her orange top. Inside the magazine, Selena dished about sharing her life on social media. “I’m utilizing social media right now because of my age and because, to be honest, everybody else in the world was talking about me," said. "So I wanted a f***ing say.”

She continued: “I honestly had to, because I didn’t really expect my life to be as public as it was. 'Is this going to destroy me or make me?' I still have to make that choice on a daily basis.”

While Selena is extra close to Miranda, the "Same Old Love" singer opened up to the magazine about closing the Justin Bieber chapter of her life. “I’m so exhausted,” she said about the "Love Yourself" singer. “I honestly am so done. I care about his health and well-being. But I can’t do it anymore.”