Being single isn’t too bad when you have a family like Dakota Johnson’s! It was a family affair for the actress on Wednesday night at the premiere of her new film How to Be Single. 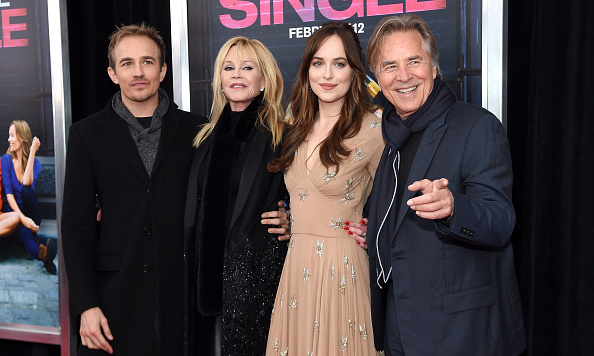 Melanie and Don, who split in 1996 after remarrying a second time, walked the carpet, posing for photos together. The proud parents beamed with pride as they awaited their daughter’s arrival at NYU’s Skirball Center for the Performing Arts

Once at the premiere, Melanie posted a photo of the father-daughter duo to her Instagram account. She captioned the sweet photo, “@donjohnson and @dakotajohnson at her premier of How to be Single.... She's amazing! The movie is so funny, you laugh, you cry! Don is a #veryprouddaddy and I am a very #proudmama.”

And of course, the beaming mother didn’t exclude herself. Sharing a snap with her litte girl, Melanie wrote, “My beautiful Dakota and Mama❤️ She comes on screen and there's a breathless hush that comes over the audience. She is magnificent! Go see " How to be Single."”

The actress’ parents aren’t shy when it comes to praising their daughter’s work. After the Fifty Shades of Grey star’s 2016 February Vogue cover was released, her 66-year-old father posted a photo of it. He captioned the glossy cover, “How proud am I.”

Not long after, Dakota’s mother followed suit writing, “My beautiful child!!! #momsyourbiggestfan I love you Coqui.”