The tables turned for veteran journalist Chris Van Vliet during a recent interview with How to Be Single stars Dakota Johnson and Leslie Mann. Rather than asking the questions, the Miami WSVN reporter found himself unbuttoning his shirt and getting hit on by two of Hollywood’s leading ladies.

“Are you single? You're handsome,” Leslie told the 32-year-old. “You look like you workout.” While the interview might have looked awkward for the handsome journalist, Chris told HELLO! that is was not uncomfortable at all. “It was hilarious,” he said. “This is the best interview ever because it was a lot of fun and completely unexpected.”

Little did Leslie and Dakota know that they were hitting on Cosmopolitan’s 2011 Bachelor of the Year. The bachelor, who donated his Cosmo cash winnings to the Boys and Girls Club of Cleveland, even tested pickup lines on the film’s stars.

Chris told the ladies, “Are you Google? Because you’re exactly what I’ve been searching for.” The This is 40 actress quickly shut him down saying, “That’s terrible.” Dakota chimed in, “Don’t ever say that again.” 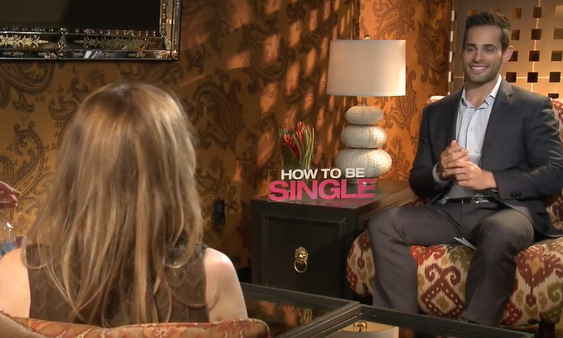 Too bad the actresses didn’t hear the real pickup line. Chris admitted that he actually flubbed his icebreaker. “I messed up the Google line!” the Toronto native revealed. “I actually researched these before I went in. I was like let’s see if I can come up with the cheesiest, corniest, worst pickup lines ever and see what kind of reaction I get.”

Despite the flirtatious interview, Chris is still currently single — hear that ladies? He said, “I’m still single and if anyone watched this video all the way through, I will probably remain single for a very long time" — though something tells us this hunky journalist’s relationship status might change pretty soon.

How to Be Single opens in theaters Friday, February 12.

WATCH THE HILARIOUS INTERVIEW BELOW