Anne Hathaway's baby bump made it's red carpet debut in Los Angeles on Wednesday! The 33-year-old, who is expecting her first child with with husband Adam Shulman, glowed as she proudly showed off her growing figure at the Los Angeles Fine Art Show's 2016 opening night premiere party benefitting St. Jude Children's Research Hospital.

For her big night out, the expectant mom traded maternity clothes for a chic black and white Marc by Marc Jacobs mini dress. Anne paired the look with embellished block heel sandals. 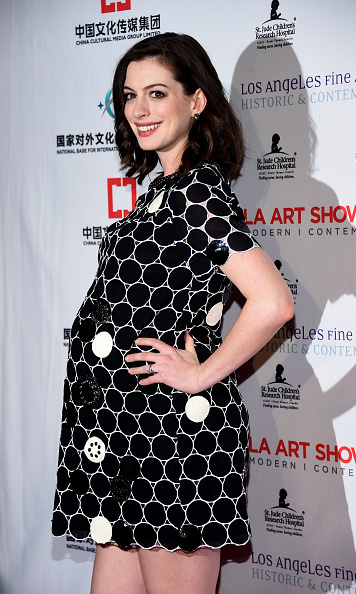 The Intern star glowed at the event, where she was accompanied by her husband Adam. The couple's date night comes just weeks after Anne confirmed her pregnancy on Instagram. The Oscar winner shared a bikini snap of herself with her baby bump, while on vacation. She captioned the photo, "Happy 2016 to my beautiful Instafriends! So, posting a bikini pic is a little out of character for me, but just now while I was at the beach I noticed I was being photographed."

She continued, "I figure if this kind of photo is going to be out in the world it should at least be an image that makes me happy (and be one that was taken with my consent. And with a filter :)." 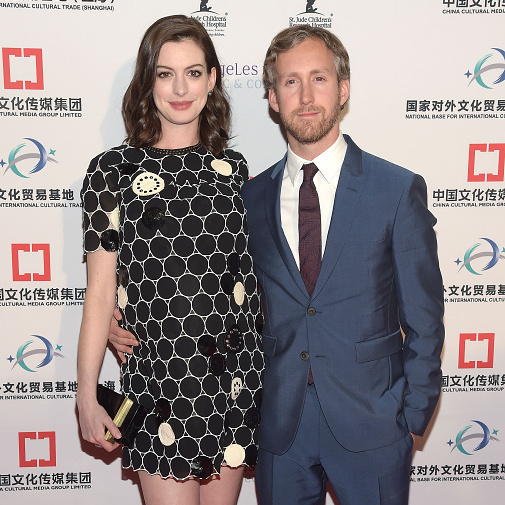 The 33-year-old recently told fans that she is on a "wellness kick." As she and her husband prepare for their impending arrival, a source close to Anne revealed to E! Online that, "Adam has been really helpful and is so excited on the baby." The source added, "Adam and Anne are doing great as a couple and this whole baby process is a bonding experience for them both."

The actress and her producer husband tied the knot back in September 2012. Since getting married, Anne has made her desire to start a family no secret. In 2014 she told the Telegraph, "I'll start with one healthy kid but I'd like to have a few naturally and adopt. I gotta get on it, you know? I'd like to have as many as I can afford, not just financially but in terms of times, because you want to make sure each one feels special."