Gina Torres does it all! The 46-year-old plays head lady in charge, Jessica Pearson on USA's Suits, who is known for her take-no-prisoners attitude. When it comes to being all business, all the time like her character, Gina knows where to draw the line. "No!," says Gina, who is married to actor Laurence Fishburne. "I go home and I'm a mommy and wife."

Gina sat down with HELLO! on location for the addictive drama in Toronto, and dished on whether her character’s confidence is contagious and shares the hopes and dreams she has for her 8-year-old daughter, Delilah. 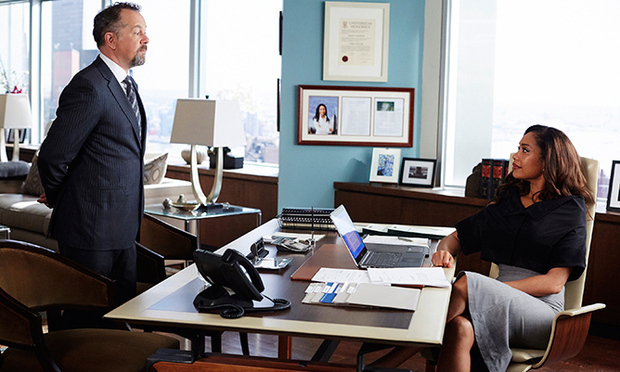 HELLO!: What will surprise fans about Jessica in the new episodes?
Gina Torres: She’s such a superhero in so many ways, you know she’s coming in to save the day – and that’s just not happening. [Laughs] We all left our capes somewhere. Our superpowers have been zapped.

H: Do you share her sense of confidence?
GT: After five years of playing her, sometimes you fake it 'til you make it – but there are elements of Jessica that started with Gina and that just comes from being in the business and knowing there are some things that you just can’t let ruffle your feathers.

H: You co-starred with your husband on Hannibal. Would Laurence ever join the Suits cast?
GT: We’ve played with that. I think over the years everybody has dangled that carrot. Come on, it’s got to be something good! [Laughs] You can’t just have him show up – but who knows? H: What is the biggest difference between you and Jessica?
GT: It’s got to be hard to be right all the time. [Laughs] That, and her choice to put all her eggs in one basket. I’ve never been that girl. My hope for my daughter is that she has the courage to at least try to do it all, to be kind to herself when it all doesn’t come together perfectly and to follow her dreams.

H: What’s it like filming in Toronto?
GT: It’s changed a lot. We’ve been here for five seasons and it went from, “What are they shooting?” to hearing screaming girls whenever Patrick J. Adams and Gabriel Macht are around. It’s very sweet.

H: Is it true that you never aspired to be a film and television actress?
GT: I always wanted to be on the stage. My primary goal was to have a life on the Broadway stage in musical theatre. That’s all I wanted to do because I grew up watching musicals and variety shows. I went to performing arts school and one of the ways that they trained you to use your voice properly was in opera. I was never going to be an opera singer, but, in terms of training your voice to do wonderful things, that’s how I was trained. But my life went in a different direction.