Zac Efron is full of adventure, and so is his lady! The Dirty Grandpa star stopped by The Ellen DeGeneres Show on Wednesday and opened up about his "awesome" girlfriend.

"Her name is Sami, and yeah, things are great," the 28-year-old dished about his model girlfriend. "She's awesome, she's a superstar." 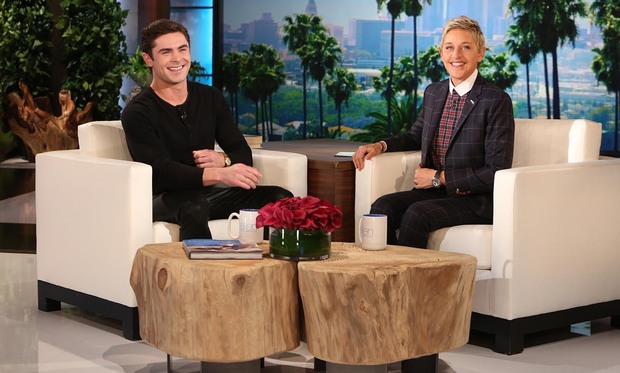 The couple, who have been together for a little over a year, enjoy the outdoors and traveling. "We get to do cool stuff," Zac says of his equally daring lady. "We do a lot of adventurous stuff together. When I'm not working, we hit the road."

The High School Musical star recently spent a lot of time with one of his idols, Dirty Grandpa co-star Robert De Niro, which Zac admitted was a little awkward at times. "Working with De Niro was really fantastic because I got to get to know the legend," he shared about the 72-year-old The Intern star. "But it was also really awkward at moments cause I’ve seen virtually everything this guy has done. I mean, I’ve seen every film. I can quote him verbatim in half of his movies, if I can even reach half. He’s never seen a single thing that I’ve done, like at all."

He continued: "So every single time we show up to work, there’s sort of that awkward moment where it’s like we have to acknowledge that you’re the greatest of all time, and I’m like you know, what could you have possibly even seen that I would have been a part of, High School Musical?"

Zac also shared that when it came to being the most fit guy on set, Robert had him beat. "He in surprisingly amazing shape," he said. "This is another reason he's a legend. He wakes up in the morning and works out with a trainer at like four in the morning, then has coffee, then goes to work at like six in the morning. I mean, I don't know how he does it. The first time I saw how buff he was (he's ex military in this movie) he does pull ups in this scene and his back muscles are like rippling, he's just so shredded. He's like a monster."

If there was any question about who would win a fight, Zac told Ellen that he has no doubt that it would be Robert. "I promise De Niro could kick my ass, I don't care what picture you show."

While Zac is busy making the rounds for Bad Grandpa, his High School Musical co-stars sat down with Good Morning America, to talk about the Disney channel original movie's 10th anniversary on Wednesday.

"At one point it felt like we were The Beatles," Zac's ex and former co-star Vanessa Hudgens told the morning show. "Now it's like we can go to the coffee store and we're completely left alone."

CLICK BELOW TO WATCH ZAC TALK ABOUT WORKING WITH DE NIRO