Ugh, as if these guys could play Cher Horowitz — but we loved watching them try! W magazine has a returned with a new installment of their "Casting Call" video series, this time using a script from the 1995 classic comedy Clueless. 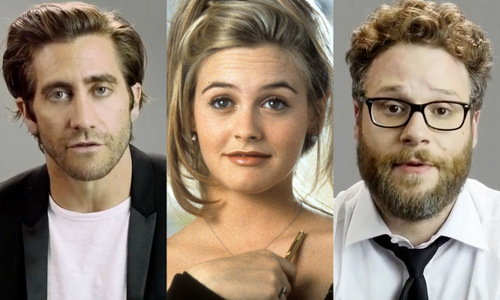 The magazine recruited some of Hollywood’s hottest hunks to audition for the role of the film’s beloved character Cher. In the clip, Bradley Cooper, Jake Gyllenhaal, Seth Rogen and Paul Dano channel their inner valley girl as they recite lines from the movie’s famous debate scene. While the men — especially Seth — really embrace the character, we have to say none of them hold a candle to the original Cher, Alicia Silverstone.

Jake kicks off the audition video telling viewers, “I’d like to preface this by saying that what was unfortunate about reading through this for the first time and I would just also like to say that I just got this is that I realized that I talk like this, which is a bummer.”

The men then proceed to recite the film's lines with their best Cher impression — looking rather, well, clueless.

WATCH THE HYSTERICAL VIDEO BELOW

Watch this on The Scene.