The David Bowie tributes keep on coming. Three days after his death, Pretty Little Liars star Troian Bellisario paid her respects to the late rockstar in New York City. The Freeform actress shared a snap on Wednesday from a memorial setup outside of David's Manhattan apartment. She captioned the photo, which features flowers and candles for the singer, "Bon voyage, Mr. Bowie.”

The 30-year-old along with her fellow PLL castmates — Ashley Benson, Shay Mitchell, Lucy Hale and Sasha Pieterse — were in the city promoting the midseason six return of their hit show. The ladies were busy making press rounds, which included a stop by Dirty, Sexy, Funny with Jenny McCarthy.

“It’s like a bunch of sisters,” Troian spilled of the show’s set while visiting the SiriusXM radio show. Shay echoed her friend’s response saying, "Honestly there's not really any drama at all."

“We have too much drama on the screen. We don’t have time,” Troian laughed. 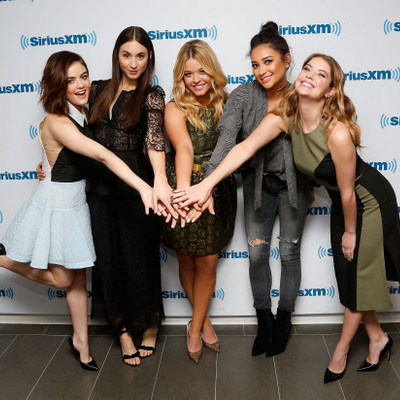 Surprisingly enough, the pretty little liar admitted she can keep a secret just as good as her onscreen character. When it came to the bombshell secret of who "A" is, Troian revealed, “Marlene [show's creator] told me about it, I would say, almost three years ago, and I’ve just been sitting on that egg for so long waiting to share it with people.”

She added, "I’m good with secrets.”