Celebrities have been flooding social media since learning of the passing of British actor Alan Rickman. The 69-year-old, who starred in Love Actually, Die Hard and the popular Harry Potter franchise, passed away on January 14 after losing his battle to cancer, according to a statement from his family. "He was surrounded by family and friends."

Following the news of his death, Alan's Harry Potter costars have been remembering the late actor. Emma Watson, who played Hermione Granger in the series, took to her Facebook to write, "I'm very sad to hear about Alan today. I feel so lucky to have worked and spent time with such a special man and actor. I'll really miss our conversations. RIP Alan. We love you." 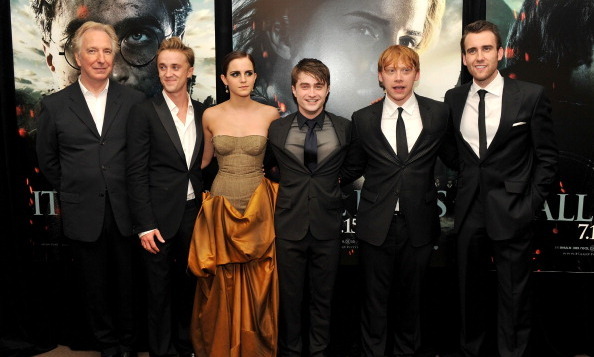 Harry Potter himself, Daniel Radcliffe, also penned a moving tribute to the legendary actor. Remembering the star, who he said was "one of the first of the adults on Potter to treat me like a peer rather than a child," Daniel wrote, "[Alan] undoubtedly one of the greatest actors I will ever work with."

"He was so encouraging of me both on set and in the years post-Potter," he said. "Working with him at such a formative age was incredibly important and I will carry the lessons he taught me for the rest of my life and career. Film sets and theatre stages are all far poorer for the loss of this great actor and man." 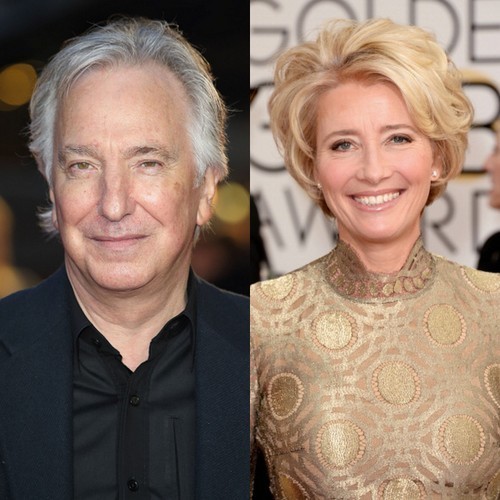 Emma Thompson, who shared the screen with the late Golden Globe winner, paid her respects to her Love Actually costar in a heartfelt statement. "Alan was my friend," the English actress said. "This is hard to write because I have just kissed him goodbye. What I remember most in this moment of painful leave-taking is his humour, intelligence, wisdom and kindness. His capacity to fell you with a look or lift you with a word. The intransigence which made him the great artist he was - his ineffable and cynical wit, the clarity with which he saw most things, including me, and the fact that he never spared me the view. I learned a lot from him."

She added, "He was the finest of actors and directors. I couldn’t wait to see what he was going to do with his face next. I consider myself hugely privileged to have worked with him so many times and to have been directed by him. He was the ultimate ally. In life, art and politics. I trusted him absolutely. He was, above all things, a rare and unique human being and we shall not see his like again.”

Scroll below to see more moving tributes to the late actor:

I was at Leavesden Studios today when I heard the news. As I walked through the canteen I thought of Alan queuing up for his lunch with us mere mortals. I recalled the trailer in which he offered me some of the greatest advice I ever received about this mad profession we shared. Being back in those corridors made me remember a lot of things and I will treasure those memories all my life. He inspired my career more than he ever knew and I'll miss him.

They got one talented angel up in heaven. Forever remembered. Forever missed.  #alanrickman https://t.co/SP2PCGK6Cd

Actors are agents of change. A film, a piece of theatre, a piece of music, or a book can make a difference. -- Alan Rickman

Alan Rickman. Incredible actor and director. Above all, the most generous, funny, loving friend to us. @Deborra_lee and I will miss you so .

No.. Dear Alan Rickman, too soon and so beloved. Everyone loved you so very much. How hard it is to say goodbye. x

Alan Rickman you were a lovely soul and a brilliant actor. I am fortunate to have known you and will miss you with the world.

There are no words to express how shocked and devastated I am to hear of Alan Rickman's death. He was a magnificent actor & a wonderful man.

My thoughts are with Rima and the rest of Alan's family. We have all lost a great talent. They have lost part of their hearts.

The entire Oscars show should be dedicated to Alan Rickman. The whole show. RIP Mr. Rickman.

Saddened to hear of the passing of Alan Rickman. Such a brilliant actor.

The spectacular Alan Rickman passed away... One of my favorite actors of all time. Thank you for your gifts. RIP

You were that voice, the stage, the film, that actor. And you will be missed truly, madly, deeply. A fan forever, I am. RIP Alan Rickman

I can't believe #AlanRickman is gone. Not a fan of this week. RIP

Oscar noms out. Couldn't care as Alan Rickman is gone & could have done every job on those movies as well, women included. Stunning talent.

Some actors you work with you will never forget. RIP The wonderful Alan Rickman xo pic.twitter.com/kIAVjA6HBY

We are deeply saddened to hear of the passing of our beloved Alan Rickman who played Professor Severus Snape. Harry Potter fans will miss him very much. He was a wonderful actor and a very dear friend.

Our industry lost one of its best talents. Thoughts and prayers to his family and friends. Alan Rickman, RIP.