A performance by Mariah Carey, a star-studded guest list featuring the likes of Selena Gomez, Nicole Kidman, Heidi Klum and a whopping $2.5 million raised by the end of the night were the ingredients for an amazing bash to benefit UNICEF on Tuesday. Also on hand to watch Mariah sing Always Be My Baby, We Belong Together and Hero at the Beverly Hills gala sponsored by Louis Vuitton were David Beckham, actress Michelle Rodriguez and model Miranda Kerr.

CLICK HERE FOR A GALLERY OF ALL THE NIGHT'S GUESTS

Actress Jennifer Connelly also stepped out for the occasion, making her first public appearance since David Bowie, her co-star in one of her earliest movies, the 1986 fantasy film Labyrinth, lost his 18-month battle with cancer.

The actress shared her sadness at the loss of her friend in a statement to Entertainment Weekly on Monday. "I met David Bowie when I was 14 and he became a hero to me — because he was an artist, and because he was a genius who had the time to be kind," she said.

"I'd never met such an extraordinary artist before, and I haven’t since — the world will be a greyer place without him. My thoughts are with his family and loved ones." 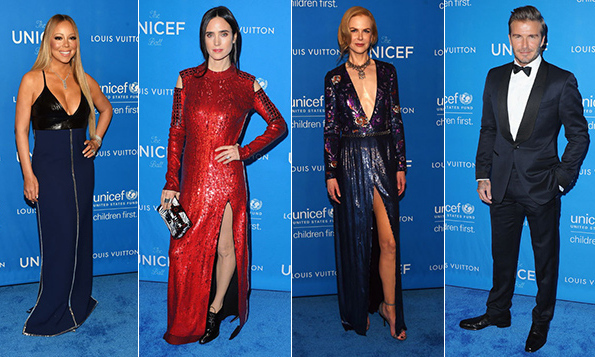 Former soccer star David Beckham, meanwhile, was dapper in a blue tuxedo and black bow tie as he was honored with the Humanitarian Leadership Award. The privilege came after he came out of retirement to play seven games on seven continents to raise money for UNICEF.

WATCH VIDEO OF MARIAH'S PERFORMANCE BELOW:

Because I will always be her baby  @mariahcarey @louisvuitton @unicef