Amy Schumer’s new man, Ben Hanisch, already has Jennifer Lawrence’s seal of approval. The Joy star, who went up against her pal in the best actress category at the 2016 Golden Globes, shared her two cents on her best friend's boyfriend.

“[He] is very sweet,” Jennifer revealed to ET on the red carpet before heading into the award show on Sunday night. When asked if she likes Ben, the Golden Globe winning actress said, “I do.”

And not only is Ben a nice guy, but Jennifer admitted he is also easy on the eyes. She told Extra, "[He's] great. Ben is like hot and like when I first saw him I was like ‘Ohhh’ and then I met him and I was like he's like super sweet, he does not have to be that nice cause he's hot."

Amy was accompanied by her new beau on Sunday for her big night. Prior to the show, Ben shared a photo of himself with his famous girlfriend, writing, “So excited for this talented woman tonight!”

While on the red carpet, the comedienne admitted to PEOPLE, "We're in love and it's really exciting.” During her conversation with ET, Amy also used the time to joke about her new relationship. She said, "Apparently having a boyfriend is the biggest accomplishment of the year for me."

Amy and Ben recently went public with their relationship and, despite reports, the pair did not meet on the popular dating application, Bumble. On New Year’s Day, the furniture designer praised his girlfriend, writing, “Sometimes in life you get extremely lucky, and the smartest, funniest, most beautiful woman comes along when you least expect it. Here's to what adventures 2016 brings!” 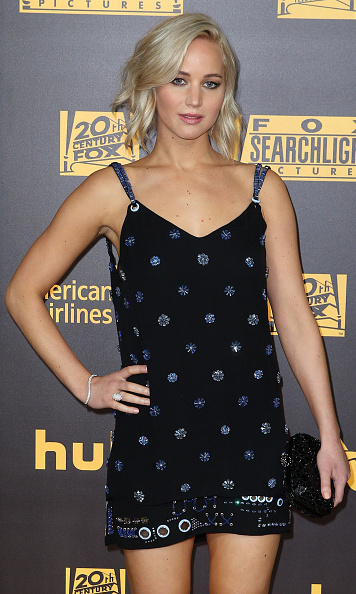 Following Jennifer's third Globe award, the starlet let her hair down (literally) at Fox and FX's 2016 Golden Globe Awards after party. The 25-year-old traded her elegant red Dior gown for a more festive spaghetti-strapped, mini Versace dress — she still looked like a winner to us!