How many mother-daughter mega-stars can you fit in one Instagram picture? In an epic photo taken in Aspen, Melanie Griffith and her good friend Goldie Hawn pose with the next generation of their respective famous families: Goldie's actress daughter Kate Hudson and Melanie’s little girl Dakota Johnson of Fifty Shades of Grey. 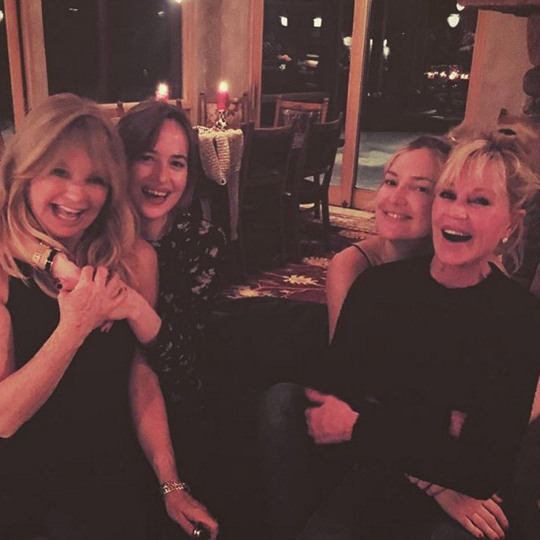 With Goldie getting a hug from Dakota in the picture, and Kate paired up with Melanie, the foursome appear to be enjoying their time together in the Colorado resort. Alongside the Instagram post, the Working Girl actress wrote “Goldie, Dakota, Kate and me having some giggles in Aspen! Mother-Daughter times are the best!!!” to her 151k followers.

Dakota was joined by her brother Jesse Johnson, far left, to co-star in another group shot

Showing that it wasn’t just the girls that were having a good time, 57-year-old Melanie also uploaded a video of her sons Jesse Johnson and Alexander Bauer singing and playing guitar for a Action in Africa event being held in the ski resort.

The actress is no doubt looking forward to celebrating with her friends and family after what has been a challenging year. She and husband of 18 years Antonio Banderas split in 2014, and this year saw the divorce finalized.

In a statement released when they announced their plans to divorce, the couple said: “We have thoughtfully and consensually decided to finalize our almost 20-year marriage in a loving and friendly manner honoring and respecting each other, our family and friends and the beautiful time we have spent together.”

The former pair have been known to put their differences aside for the sake of their children, and attended their daughter Stella's high school graduation together this year.