Self-proclaimed Bravo super fan Jennifer Lawrence made her debut on the cable network’s show Watch What Happens Live on Monday. During her clubhouse appearance, the Joy actress dished on her November girls’ night out with Adele and Emma Stone.

“We talk about everything but work,” Jennifer revealed of their night on the town. 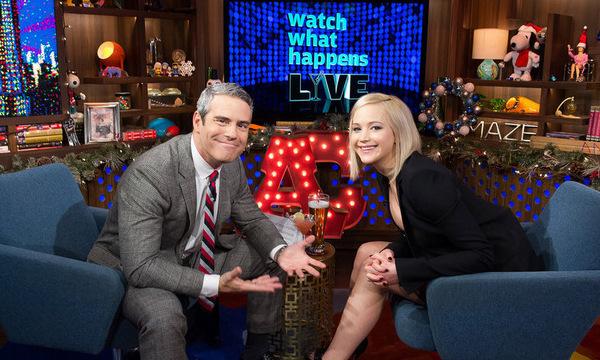 When asked by a caller who picked up the group’s check, the 25-year-old said, “Oh god, I don't know who picked up the check. It might have been Adele.” She continued, “I think we would've all been like, 'Adele, you've had a pretty good week.' So I'm sure we would've probably let her get it.”

The actress also got candid when it came to dishing on her Hunger Games co-star Liam Hemsworth. During a round of Plead the Fifth, the actress revealed to host Andy Cohen that she’s locked lips with the handsome Australian off-screen. "Liam and I grew up together. Liam's real hot. What would you have done?" she laughed.

Andy replied, "I would say yes. I mean, I'd pick Gale over Peeta any day." Jennifer quickly quipped, "I did, at one point!"

One person you can bet she will never kiss is Justin Bieber. While the Biebs recently told a radio station that Jennifer is sexy, the Golden Globe nominee admitted on the talk show that the "Sorry" singer would definitely be a “hard no.”