Jennifer Lawrence dodged an embarrassing bullet a few years ago! The Joy actress dropped by the Late Night show on Tuesday, where she revealed to Seth Meyers that she had a crush on him and almost asked the then-engaged host out on a date. 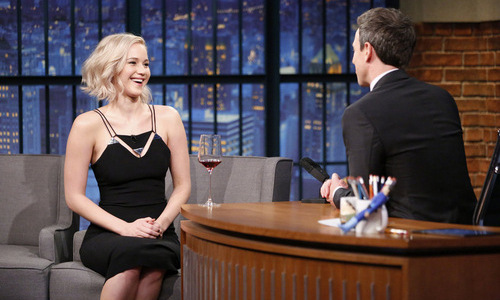 Jennifer admitted she had a crush on the 'Late Night' host Photo: Lloyd Bishop/NBC

The 25-year-old added, “I created the romance in my head because I’m delusional.”

When the funnyman didn’t ask her out, Jennifer decided to take matters into her own hands, but thankfully someone shed light on the believed "romance," quickly derailing her plan. The star explained, “I had this whole plan. I was going to ask you out, and I started — thank God — I talked to the wardrobe lady about it. I was like, ‘I think I’m going to ask Seth Meyers out. I’m going to give him my number.’ And she was like, ‘Honey, he’s engaged.’”

Now that enough time had passed, Jennifer felt comfortable admitting her crush to him. And as Seth explained, it was “safe” to tell him since everything worked out. “I married that lady,” he said. Seth and his then-fiancée Alexi Ashe wed back in September 2013. The couple is currently expecting their first child. 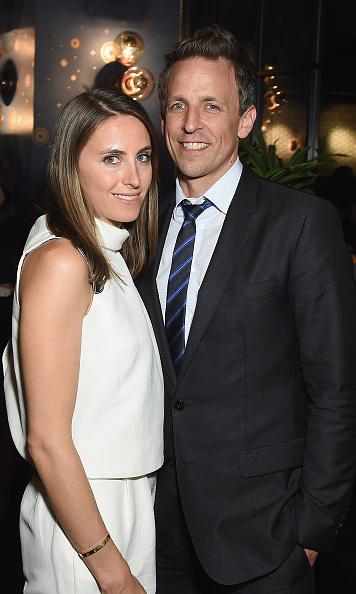 Seth and wife Alexi announced they were pregnant in November Photo: Getty Images

Seth toasted to “how everything worked out,” to which Jennifer replied, “Cheers to my humiliation.” The Hunger Games actress jokingly added, “I’m happier without you.” Seth quipped, “My wife would contend you probably are.”

While on the NBC show, the actress also revealed that Seth wasn’t her only celebrity crush. Jennifer admitted she once gave her number to comedian Larry David, though he never called. “But [Larry] also might have been married. Apparently I don’t ask about these things. I’m so not that girl!” she said. “I would never go after another woman's man. I always forget about step one, find out if he already has a woman. I get so carried away and already go into the delusion of ‘Oh, my god, we’re in love!’”

Jennifer joked, “Oh, my god, I’m like a predator.”