Better safe than sorry? Joan Collins dropped by Watch What Happens Live on Tuesday night, where she shared a surprising fact about her goddaughter Cara Delevingne.

“At Cara’s christening, 23 years ago, she had 16 godparents, of which I was one,” Joan revealed. “Her parents are really good friends of mine.” At the time, the actress asked Cara's mom and dad Pandora and Charles, why they had chosen so many godparents. "They said, 'Well, in case any of them die!’,” she quipped. 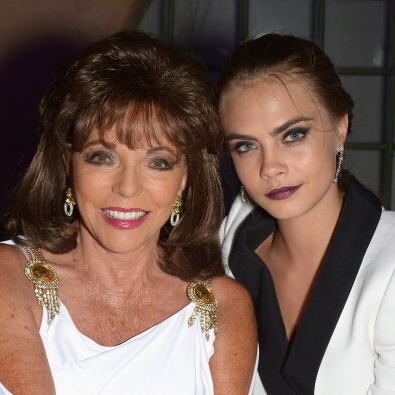 The 82-year-old and her supermodel goddaughter are both working on the upcoming Absolutely Fabulous movie. As for who the two are playing, Joan told the Cut, “It’s a secret because they have lots of cameo stars.” Though she did admit that she has given the 23-year-old acting advice. "Don’t. That’s what I always say to [Cara],” she revealed. “I said to her — from when she said she wanted to be an actress when she was about 16 — I said, ‘You know what Jack Nicholson always said in that movie As Good As It Gets? ‘Just what the world needs: another actress.'" Joan added, "No, but I told her, 'Just learn your lines and be as honest as possible.'"

While on the Bravo show, the screen legend also dished on her former Dynasty co-star, John Forsythe, who played her character Alexis Colby’s ex husband Blake. Similar to their fictional characters on the show, Joan admitted that the two were not the best of friends off camera.

“No, we weren’t. I think that John had a little difficulty in relating to the fact he had to hate me so much in our show, that he found it difficult to have a good relationship with me,” she told Andy Cohen. “He never sort of warmed up to me." 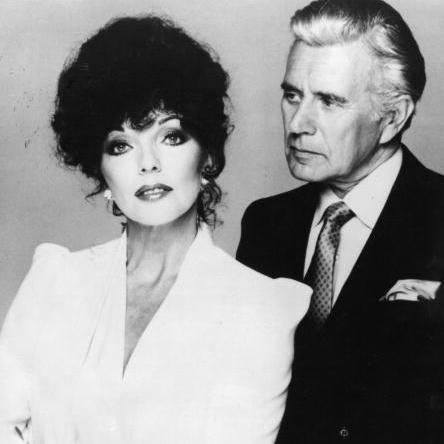 In fact, Joan revealed for one entire season, she and her co-star did not speak. The actress explained, “[At] the People’s Choice Awards we won as a whole company and we were told that when we were being presented with the award, it was going to be given to John. However, they gave it to me. He didn’t like that. I said, ‘Oh thank you very much, I’m going to give it to our fearless leader’ and he said, ‘She’s said enough’ and that was it. And it was very unpleasant, I have to say. It wasn’t nice.”

Joan was asked to reprise her legendary character Alexis with WWHL host Andy to reenact an iconic — dare we say hilarious — scene. The sketch was complete with Andy donning a blonde wig as Crystal, and of course, with an infamous slap from Alexis herself.

Feuds aside, Joan is still mourning the loss of her sister Jackie Collins, who died back in September of cancer. Recalling her favorite memory of her late sister, the actress said, "Jackie and me walking on the beach — many years ago when we were children and picking up seaweed and hanging it around our necks."