Going country and going shopping! During the latest installment of "Carpool Karaoke," James Corden was joined by Carrie Underwood during Wednesday night's episode of The Late Late Show.

The country superstar helped the British funnyman make waves in the country music world by singing along to some of her top hits. Carrie, 32, and James, 37, started off their trip by singing Carrie's lead single "Smoke Break" off of her latest album Storyteller. 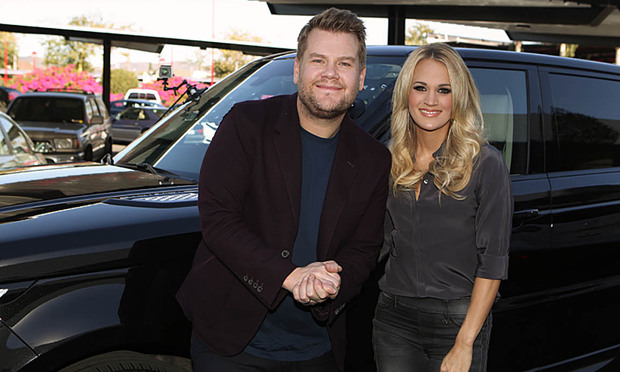 After the two belted out the tune, James asked Carrie about marriage to hockey star Mike Fisher, and if she is worried about the fighting that comes with his profession. "Have you seen his latest fight?" she asked the host. "He knocked a guy's tooth out. It was hot."

The duo then sang Carrie's hit "Jesus Take the Wheel," after which, James let the steering wheel go scaring Carrie a little. The host realized that there is more to country music than singing so he asked the mom-of-one for tips on how to "make strides" in country music. 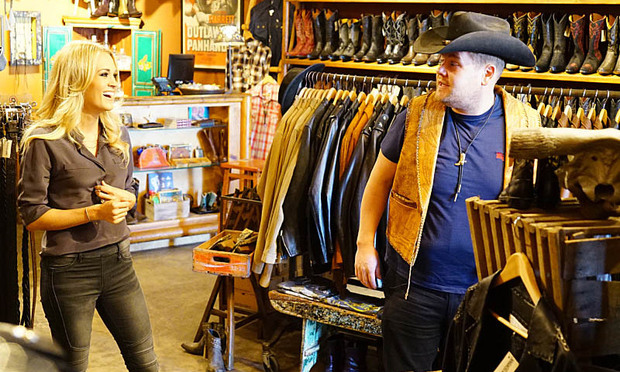 She informed him that it's all in the boots. "The boots are our roots," the American Idol superstar told James, who then made a quick pit stop to a store that would help him get more in touch with his country side.

Pretty soon, James was making big waves in the country music scene when he tried on his first pair of cowboy boots, a vest and topped it off with cowboy hat. An outfit that Carrie called "incredible," but was too expensive for the late night host's taste.

After settling on the cowboy hat, Carrie and James made their way back to the car, where they sang "Before He Cheats," and had a contest to see who could hold a note for the longest.

The pair ended their trip with a duet of Wham!'s "Wake Me Up," after James found out that Carrie knows all the words to every one of the '80s group's songs. According to Carrie, her and James make an "awesome" karaoke pair.

CLICK BELOW TO WATCH CARRIE AND JAMES DO "CARPOOL KARAOKE"