It wasn't until the age of 8 that Liv Tyler discovered that Aerosmith frontman Steven Tyler was her biological father. The actress was discussing the startling revelation while opening up about her interesting family life and upbringing on the British TV show The Jonathan Ross Show.

"It's quite an emotional story, honestly, the whole thing," she told Jonathan. "My mother was very young when she had me and there was a little bit of confusion about where I came from but I was very loved and very well taken care of by all my family, which was wonderful." 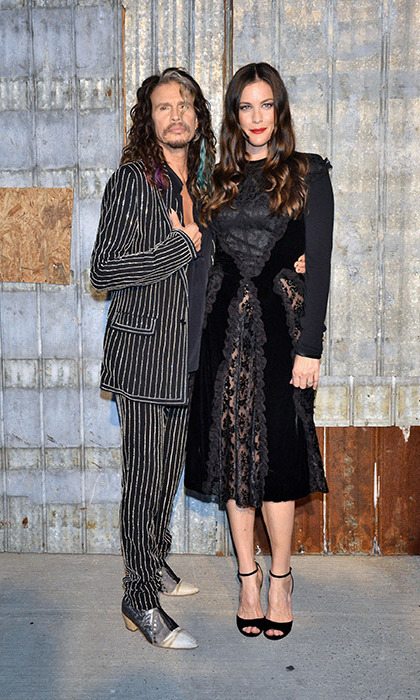 Liv Tyler discovered her father was Steven at the age of 8 Photo: Getty Images

On how she discovered the truth, Liv, whose mother is American singer Bebe Buell, went on to explain: "I kind of figured it out because he looked exactly like me and I have a sister named Mia who is a year younger than me and I saw her standing at the side of the stage at a concert and I was literally like looking at my twin."

Mia, who is Steven's daughter with second wife Cyrinda Foxe, was born just 17 months after Liv. "She looked exactly like me and I looked at my mom and she had tears in her eyes and I kind of put it all together."

UH OH MY NEW GRANDSON SAILOR IS SHOWING THE TYLER GENE! OMG @misslivalittle HE'S GOT A MONKEY ON HIS BACK ALREADY...

Liv, 38, was born Liv Rudgren after her mother's partner at the time of her birth and the man who brought her up when she was young. "Todd was such an amazing [man]," she said. "It's funny because people only ever talk about Steven and they always tell all these stories but [Todd has] been such a beautiful, wonderful influence in my life and I still consider him my father."

While on the show, the brunette also discussed her 10-month-old son Sailor, who she has with fiancé David Gardner, and the couple's decision to make their close friend David Beckham godfather to their son.

❤️ Sweet boys !!!❤️ sailor having lunch with his daddy @davidgardner and his God daddy @davidbeckham

Joking with the host, Liv said that they made the right choice as the soccer superstar "gives very good presents," before sincerely adding: "And he’s a real gentleman, he’s a very elegant person so very sweet… He loves being a father."