Richard Gere and his girlfriend Alejandra Silva put on a loving display on Tuesday in Madrid as the actor walked the red carpet for his latest film Time Out of Mind, in the Spanish capital. The 66-year-old held on tightly to his girlfriend of more than a year.

The couple showed that they are more in love than ever during their first official carpet together. She looked stunning walking the red carpet in a plunging white dress that featured sequined detailed sleeves.The young Spanish socialite, 32, lovingly placed her head on the Pretty Woman star's chest as they posed together for photos. 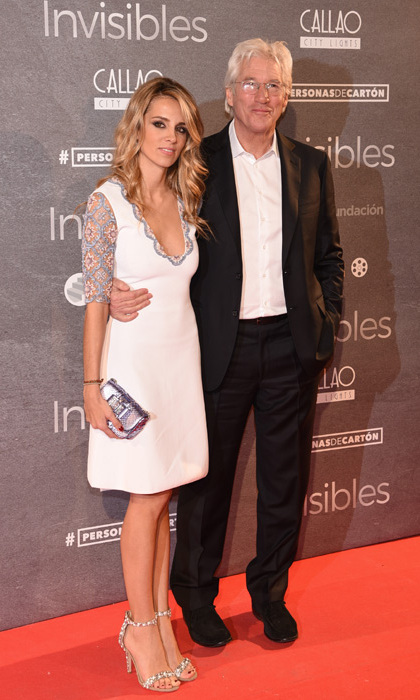 Richard Gere proudly posed with his girlfriend Alejandra Silva at the premiere of his new film Photo: Gtres

The happy couple looked very pleased to see each other and it appears, although she lives in Madrid and he in New York, the relationship seems to be getting stronger. Speaking to our sister publication HOLA! Alejandra said, “I always thought long-distance relationships were complicated, but actually, with all the technology that we have, it’s a lot easier.”

So far the pair have been very secretive about their relationship. Despite going out for over 12 months, their relationship status was only revealed in June during the 61st Annual Taormina Film Festival in Italy. The couple, who are in a long distance relationship, looked very loved up on the red carpet Photo: Gtres

The duo met after separating from their respective partners. Richard is currently finalizing his divorce from actress Carey Lowell, with whom he has 15-year-old son Homer James Jigme Gere. Alejandra, whose father was the vice-president of football team Real Madrid, is also going through the divorce process with her estranged husband Govind Friedland. The two have a son Albert together.