Madonna has the power to unite music and Game of Thrones. HBO’s Natalie Dormer and rapper/producer Timbaland stopped by Bravo’s Watch What Happens Live on Tuesday and dished what it’s like to work with the Queen of Pop. 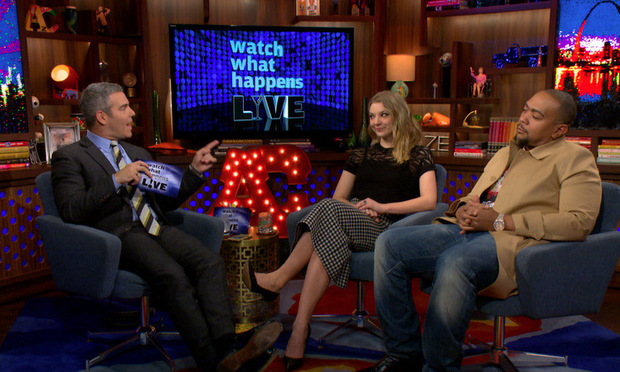 The producer, who has previously collaborated with Madonna on her song “4 Minutes,” admitted to Andy Cohen that “she’s like a real boss.” He continued, “You kind of be nervous because she’s like very stern.”

Natalie quickly chimed in, “But she likes people who challenge her back.” The Game of Thrones’ star who is currently promoting her latest Hunger Games film, Mockingjay Part 2, has worked with the singer in the past. Madonna cast the 33-year-old in her 2012 directorial debut film W.E.

Agreeing that the "Material Girl" singer likes a challenge, Timbaland said, “She really does. You can’t give into her. And that’s how she gets her... If you jump back, you’re weak."

Madonna isn’t the only big name Timbaland has worked with. The 43-year-old rapper has also collaborated with Justin Timberlake on his 2002 hit song “Cry Me a River.” When asked by Andy if Justin had discussed his former flame Britney Spears during the song process, Timbaland revealed, “Yes.” But that doesn’t mean the song was about the popstar! Instead, Timbaland said the song “was a mystery.”

And while Timbaland has never worked with Justin's ex, the “Sometimes” singer has been linked to Madonna. The two famously shared a kiss onstage at the 2003 MTV Video Music Awards.