Jennifer Lawrence has been know to take a tumble or two. While some might think the actress’ falls are all an act, her Hunger Games co-star Liam Hemsworth set the record straight on Late Night with Seth Meyers revealing that she’s really just a klutz. 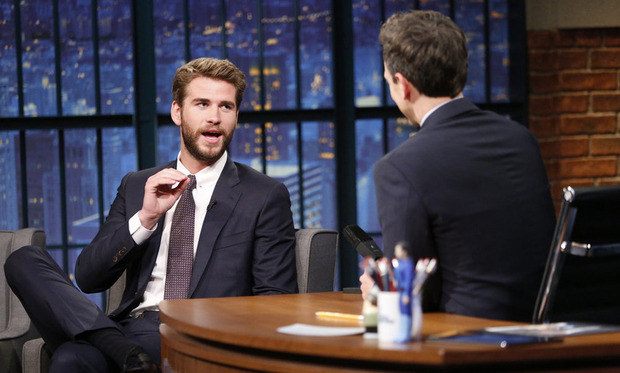 “She’s terrible at walking,” Liam told the talk show host. “I am constantly surprised by how much she falls down without trying at all."

Perhaps her most famous fall came in 2013 as the actress made her way on stage to collect her first Oscar for Best Actress. Since then, Jennifer's roster of trip-ups has grown and Liam has had a front row seat to several of them during the press tour for their new movie The Hunger Games: Mockingjay Part 2 . The 25-year-old actor might have even been responsible for one of the famed actress’ falls in London. 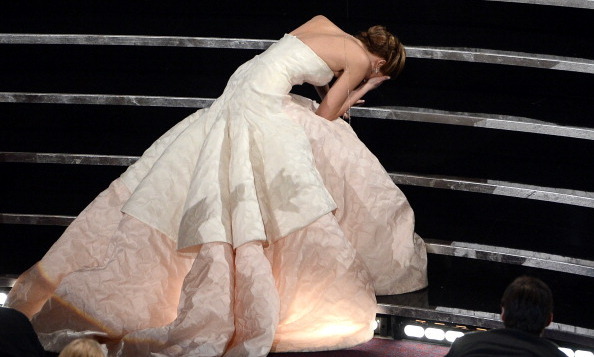 Jennifer Lawrence falls in 2013 as she makes her way on stage to collect her Oscar Photo: Getty Images

He explained, “One of her heels broke and she went down – I picked her up, and she now has only heel. So I’m walking her out and we get outside the theater, and then a friend of mine comes up, like ‘Hey, good to see you’. I let go of Jen to hug this person and [she went] straight down, hits the ground.”

Liam quipped: “I take full responsibility for that one.”

Unfortunately for Jennifer that was just the beginning of her spills during the pair’s travels together. "She also fell in Spain going up the stairs at a premiere and she also fell in Berlin getting up off of a chair, straight down again.” He added, “She’s a clumsy, clumsy girl.”

On Wednesday, the Hunger Games actress owned up to being a klutz on the Tonight Show. Jennifer told host Jimmy Fallon, "I fell in every single city on the press tour. I fell around the world." Like most people though, when it comes to discussing her trips and falls, Jennifer revealed she's not a fan. She said, "I'm afraid people think it's like kind of a shtick and it actually makes me kind of mad when it happens. At this point it's so embarrassing."

And the 25-year-old's clumsiness isn't limited to just walking. The actress admitted that while traveling this week she had an accident. She said, "I spilled yogurt all over the plane and the whole plane smelled like sour milk the whole time." At least she can laugh it off!