With the final installment of the Hunger Games due out later this month, Josh Hutcherson is reflecting back on his time working on the franchise in a new interview with DuJour magazine. 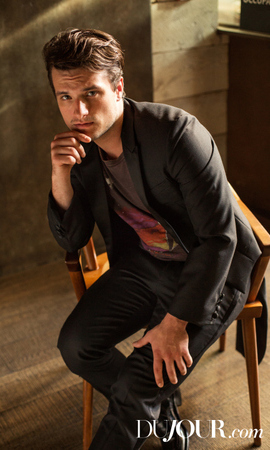 "The Hunger Games has been the equivalent of a college experience,” he tells DuJour. “At 18, you go to college. Now I’m 23. I’m out of college.”

And the hotel were definitely like the dorms. “We were filming in Berlin, all staying in the same hotel. Most of us were on the same floor," he continues. "It was an open-door policy. At any moment you were ready to cover yourself because there was some incoming nonsense from outside. Like Woody Harrelson half-naked with a towel trying to smack you.”

The fantasy franchise, which made it's debut in 2012, spurred strong friendships both on-and-off screen. Since starring alongside Jennifer Lawrence in the films, the two have been dubbed Joshifer. The 23-year-old actor reveals to the magazine that he and Jennifer along with co-star Liam Hemsworth grew so close that they would have slumber parties — but it's not what you think! "It’s not the three of us cuddled up in a bed!" he says, but rather to avoiding drunk driving. He adds, "We’re being responsible young adults!” 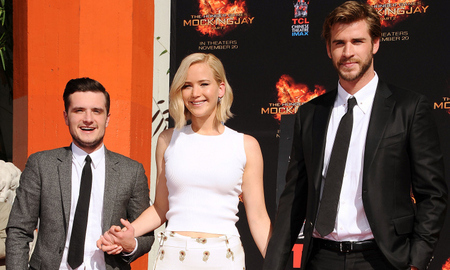 After wrapping the film, Mockingjay, Part 2, Josh reveals to DuJour that he and Liam split a bottle of Scotch and everyone hugged and freaked out. The trio (Josh, Liam and Jennifer) reconvened a week later for dinner where he says they laughed at how "dramatic" they had been.

Josh's fame has skyrocketed since signing on to the franchise, leaving him with millions of Twitter followers and a huge fan base. The Hunger Games actor also mentions he's had some crazy fan encounters, recalling one incident while filming in Cincinnati.

He explains, "I woke up one morning to go to work. I walked to my car. And literally sitting on the ground, sleeping in front of the car—huddled up in hoodies and blankets—were two 12 or 13-year-old girls and their mom. They popped up like a f---ing Jack-in-the-Box. They said they’d been waiting there for hours and hours for me to come out. I was like, this is not right.” 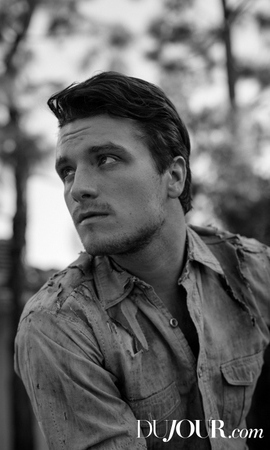 And while the heartthrob has captivated the hearts of teens across the nation, Josh is currently off the market. The actor has been dating his former Escobar: Paradise Lost costar, Claudia Traisac, for two years. “There’s a lot of traveling, a lot of Skype,” he admits of their relationship to DuJour. “It’s kind of cool. We’re doing this international thing. We’re young, we make it work.”