Meet the new scream queen. Lea Michele gave her vocal cords a work out when she appeared on The Ellen DeGeneres Show on Tuesday. The Glee actress, who stars in the new Fox horror comedy Scream Queens, jumped and squealed in surprise when Ellen DeGeneres scared her. 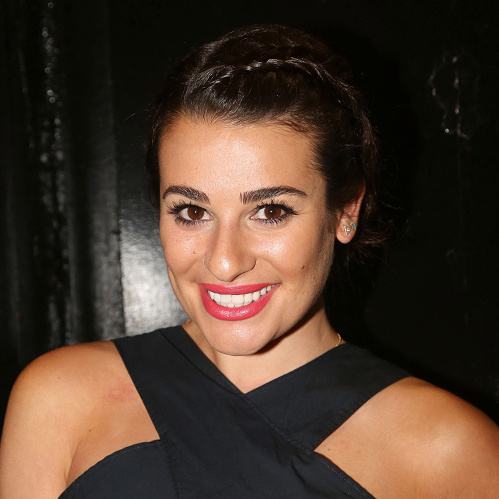 The former Broadway star was talking about how she wants to watch the original Halloween with the film's star (and her Scream Queens co-star) Jamie Lee Curtis, when a guy dressed as the film's killer, Michael Myers, jumped up beside her. "That's it," Lea said as she grabbed Ellen's arm. "I'm not coming on your show again." (We're not sure if she was serious.)

Lea, 29, also talked about shooting the new series from Glee and American Horror Story creator Ryan Murphy in Ellen's hometown of New Orleans. She raved about the restaurants, as Ellen shared pics of Lea and co-star Emma Roberts doing some extreme Pilates moves that Lea explained were meant "to counter balance" all the rich Cajun food. She continued, "It's supposed to be really good for you."

Just two besties hanging out! @emmaroberts love you so much! Thanks @vanessaroberts85 for a great session @romneypilates today!!! Feeling so pumped and ready for work now!!! 

Ellen asked if she'd also been on a swamp tour, and Lea enthusiastically said she had. "I fed a gator, I did the whole thing," she smiled as Ellen explained that gators can actually feed themselves.

Lea, who wore a Jonathan Simkhai dress on Ellen's show, also talked about a challenging scene where she was buried up to her neck in dirt. "I read the script and I thought they were totally going to do this on a sound stage but we were actually in the ground," she said. "I didn't think I was going to be so freaked out by it and then you're buried up to your neck and I'm secretly panicking and I'm not going to let anybody know."

She couldn't move her hands, so Ryan came to her aid when some of the live props got a little too friendly. "I had these huge spiders crawling all over my face and Ryan would come over and whack them off of me," she explained. "It was really intense."

Lea and the cast, which also includes Ariana Grande, Abigail Breslin and Nick Jonas, celebrated the show's premiere with a party at The Wilshire Ebell Theatre on Monday, September 21. The singer and actress showed off all that Pilates work in a black cutout dress by David Koma London and shared a pic on Instagram with her date, boyfriend Matthew Paetz.