As anyone who follows them on social media knows, Ryan Reynolds and his wife, Blake Lively, might just be the funniest couple in Hollywood, and the most fun to hang out with. Last week, the former Gossip Girl star responded on Instagram to rumors that she was throwing shade at Taylor Swift, and insisted that she was "obsessed" with the singer. Sharing a photo of Taylor with her niece, Blake wrote, "I have a 'Taylor Swift Please Be My Wife Voo Doo Doll.'" 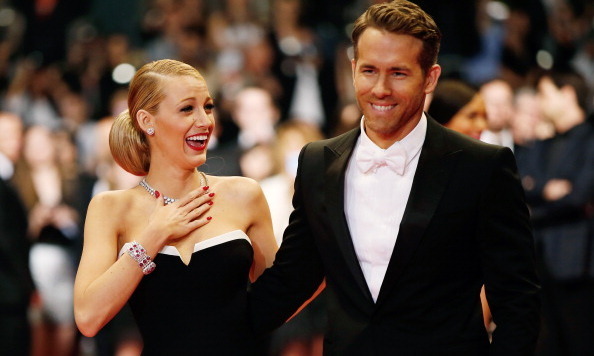 She continued the post: "Look how rad she is here making my niece Heather feel like a rock star. Love my Canadian family almost as much as I love Taylor Lively. I mean Swift. Ok, FIIINE we can hyphenate our last names Xo Blake Swift-Lively 4eva."

Well, it turns out Ryan is just fine with his wife being a Swiftie, and joked in an interview with the Toronto Sun on Wednesday that he's "trying" to make their marriage happen. "This is a real modern romance we're talking about," he said. "There's three of us now."

As to whom would get the middle spot in the bed, Ryan added: "You're randomly selected each day. So everyone punches a ticket when we go through the kitchen in the morning."

The Vancouver native was north of the border to attend the Toronto International Film Festival premiere of his new film, Mississippi Grind. Before the screening, he said that he'd wanted the role so badly when he met the directors more than two years ago, he'd promised them his first-born child if they would cast him in the film.

"And here we are. I'm very very happy that we're here and that we get to show you this film and I get to be in it, [which] I'm thrilled about," he continued. "I'm also a little sad cause since then I've had a daughter and in one week I'll be giving her up. I'm not like super sad, cause its really hard work, but I feel confident in their abilities to raise that child as if it were my own." 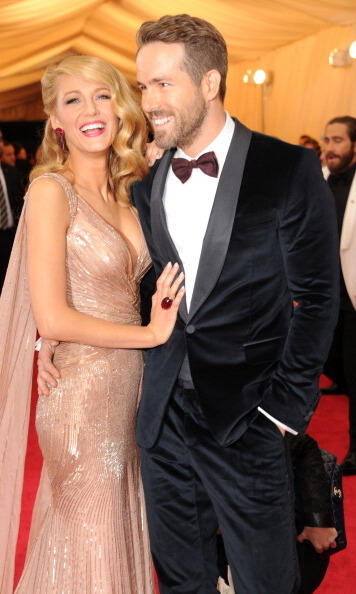 Blake and Ryan are funny and beautiful! Photo: Getty Images

Blake shared a YouTube video of her husband's speech and despite him joking about giving away their 8-month-old daughter, James, she wrote, "I know I should be mad but…" and followed it with love emojis.

It sounds as if little James is a handful. Ryan told the Toronto Sun that he's had some mornings with his daughter "that were from a broad comedy that nobody would ever want to pay to see. Just absolutely idiotic, where you're doing eight things at once. Your baby's screaming and crying, you're trying to make some kind of coffee, it's already 4 p.m. and you realize you haven't eaten yourself. I commend any single parent that's ever done it."