Ariana Grande proved that she is every female pop star all rolled into one! During her appearance on The Tonight Show Tuesday night, the 22-year-old played a game of "Wheel of Musical Impressions" with host Jimmy Fallon and won. 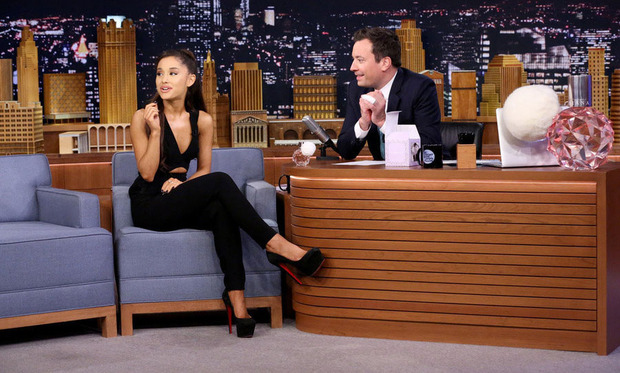 For her first challenge, the "Problem" singer channeled Britney Spears, blowing the tonight show host away with her spot on impression of the pop diva singing "Mary Had A Little Lamb." The "Baby I" singer also did an amazing impersonation of former The Voice coach Christina Aguilera while singing "The Wheels on the Bus" complete with her signature vocal runs and hand motions.

The most impressive song of the night came during the final round when Ariana and Jimmy competed in their "I Can't Feel My Face" off. Jimmy was ordered to sing The Weeknd's tune giving his best Sting impersonation, while Ariana had to put on her best Celine Dion voice. The pop star blew the talk show host out of the water with her performance in the tune of the Canadian songstress.

In addition to playing the fun game with the host, Ariana showered Jimmy with a sample of her latest fragrance Ari by Ariana Grande and announced her new single "Focus."

On Tuesday morning, Ariana stopped by Good Morning America and addressed July's donut-gate scandal. "First of all my behavior was very offensive, and I apologized. There's no excuse or nothing to justify it," she told host Lara Spencer. "I think that as human beings we say and do things that we don't mean at all sometimes. We have to learn from it. That's part of our process. We have to learn from our mistakes and that's how we grow."