Hey Mr. DJ! Leonardo DiCaprio showed off his impressive skills deejaying with Naomi Campbell during a beach party at action star Jason Statham's house in Malibu on Sunday. The action was captured in a series of photos and videos by entertainer O’Neal McKnight, who shared on his Instagram account, captioning it: "Dj Leonardo Dicaprio on the ones and two's #malibu #leonardodicaprio." 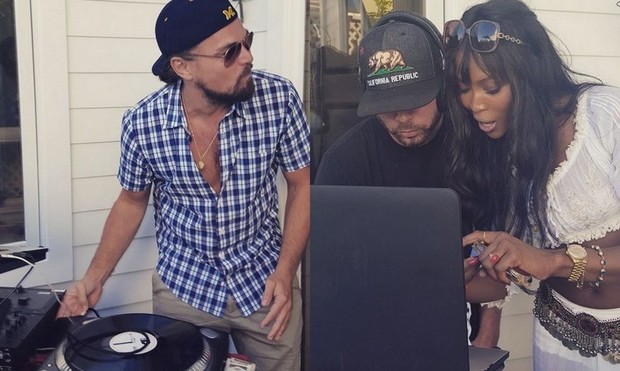 In addition to O’Neal and wife Miriam Sternoff, who star on the hit reality show Kosher Soul, famous faces at the bash included: Robin Thicke with his girlfriend April Love Geary, Scott Disick, Russell Simmons and Orlando Bloom. Top model Naomi loved the tunes that Leonardo was dishing up, and according to O’Neal, so did the rest of the guests. “The crowd really got going when he started playing the music,” he tells HELLO!. “He played a ton of old school hip-hop. He and Naomi were having fun going back and forth for about an hour and a half playing songs.”

The 40-year-old Wolf of Wall Street star also showed off a trimmed beard. The actor had been sporting unruly facial hair for the past year, all in part for his role in the upcoming 1820s-set drama The Revenant. The film, directed by Alejandro González Iñárritu (Birdman), also stars Tom Hardy and Leonardo’s childhood friend, Lukas Haas, who was also at the bash.