Stepping out for the for the first time since her surprise wedding and friend-filled honeymoon, Jennifer Aniston wore a simple black outfit that showed off her newest accessory: her gorgeous wedding ring. While the focus of the night was on the actress' latest movie She's Funny That Way, all eyes were on the elegant double band with a delicate ring of diamonds in between.

Jennifer debuted her wedding ring as she stepped out for the premiere of her latest film Photo: Getty Images

The simple but stunning piece was created by jewelry designer to the stars and Jen's BFF Jennifer Meyer, the wife of Spider-Man actor Tobey Maguire. Although guests like Howard Stern have given away details about her big day, Jennifer wasn't quite as forthcoming. Asked about the day she tied the knot with husband Justin Theroux, she told Entertainment Tonight: "We had the beautiful luxury of having a beautiful private moment, and I’m going to be selfish and keep it that way!" 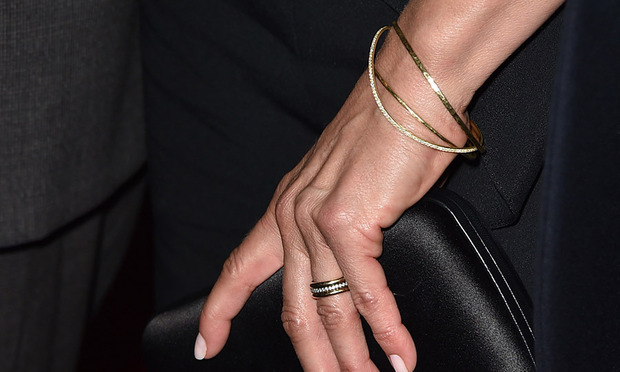 Jennifer flew solo at the premiere – new hubby Justin is currently in Austin, Texas shooting the second season of his HBO series The Leftovers with co-star Liv Tyler.

She did still have a honeymoon glow, however, having jetted off with Justin to paradise island Bora Bora, in French Polynesia, after their August 5 wedding. The couple stayed at the Four Seasons, located on Point Matira, where a night in one of the resort's hideaway over-water bungalows overlooking the breathtaking Bora Bora lagoon comes with a price tag of around $1,500. 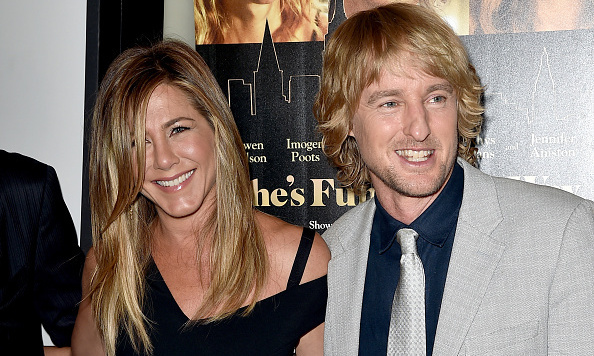 Jennifer had a post-honeymoon glow as she joined co-star Owen Wilson for the screening Photo: Getty Images

Jen and Justin tied the knot in a secret ceremony in their beautiful Bel Air mansion in front of more than 70 of their closest friends and family members. The star-studded guest list included friends Chelsea Handler, Orlando Bloom, Jimmy Kimmel, Ellen DeGeneres and Portia de Rossi, and Emily Blunt and John Krasinski.

The former Friends star and her actor love had not informed all guests that they were getting married – so as not to leak their wedding date – meaning that some friends and family turned up in casual wear, even jeans.