Vin Diesel is spending some quality time with his bay daughter and it is sooooo cute. The Fast and Furious actor posted a picture on his Instagram of him giving his almost 5-month-old daughter Pauline tummy kisses while she holds on to her daddy’s head.

“All love,” the 47-year-old captioned the sweet moment.

In March, the star opened up about choosing his daughter’s name and how he found the inspiration after losing dear friend and co-star Paul Walker.

“There’s no other person that I was thinking about as I was cutting this umbilical cord,” Vin said on the Today Show. “I just thought…I knew he was there and it felt like, you know a way to keep his memory a part of my family and a part of my world.” 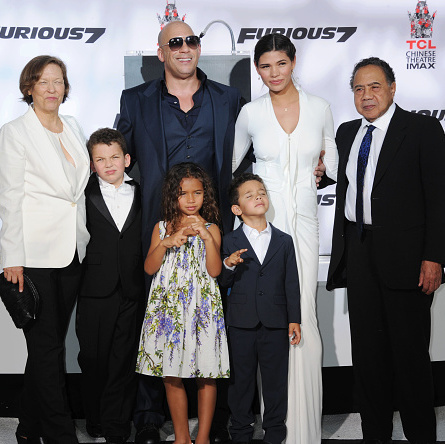 Paul died at age 40 in a November 2013 car crash. Vin remembered his friend as an amazing father and support to him.

“He went into fatherhood a lot earlier than I did, “ he said during his emotional appearance on Today, speaking of Paul's daughter Meadow, now 16. “He took on that role of kind of being the guide into fatherhood for me. It’s kind of beautiful.”

Made it home today for dinner with the family. Pauline's first Father's Day. Blessed.

“Made it home today for dinner with the family. Pauline’s first Father’s Day. Blessed,” he captioned the intimate pic of him and his little girl.

Vin and longtime girlfriend Paloma Jimenez are also parents to Hania 6, and Vincent, 4.

In April, the star called his life as a father his “favorite role” as he addressed the crowd during his Hollywood Walk of Fame handprint ceremony.

“I love my children so much,” he told the crowd full of family and his Fast and Furious co-stars.