Tom Cruise is known for his daredevil stunt in the new Mission: Impossible – Rogue Nation, but on Monday night, the actor relived his Rock of Ages days in a lip sync battle with Jimmy Fallon on The Tonight Show. Tom, 53, gamely stepped up to the microphone to lip sync two songs – and he certainly impressed.

"This is so ridiculous. I love it," Tom laughed before miming along to his first song, "Can't Feel My Face" by The Weeknd to the delight of the audience. It was then host Jimmy's turn, and he countered with a cover of the Rolling Stones classic "Undercover of the Night," imitating Mick Jagger's trademark strut and singing style. 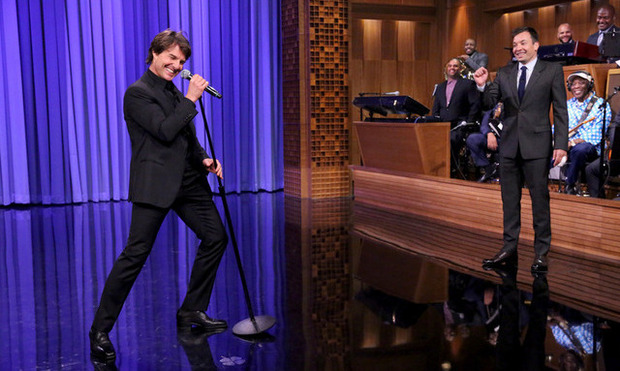 
The Mission: Impossible star pulled out all the stops for his second song with a one-man duet of Meat Loaf's "Paradise By The Dashboard," performing both the male and the female parts. There was really only one option for the last song – The Righteous Brothers' "You've Lost That Loving Feeling," which Tom famously sang in Top Gun. Jimmy and Tom teamed up as they mimed along to the track together and serenaded one lucky lady in the audience.

Tom recently admitted that he would love to reprise the role of Maverick in a sequel to the iconic 80s movie. "It would be fun," he told EXTRA. "I would like to get back into those jets. It would have to be practical. I don't want any CGI jets. I want to shoot it like how we shot the first one." 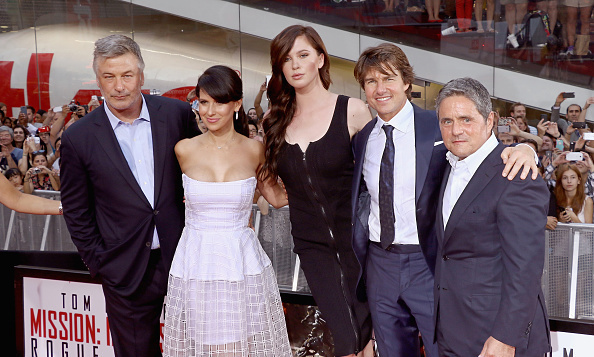 Tom is currently on the promotional trail with his new film Mission: Impossible – Rogue Nation, which has received rave reviews from critics. On Monday night, he hit the New York City premiere along with Jeremy Renner and Alec Baldwin.