Six months after Whitney Houston’s daughter, Bobbi Kristina Brown, was found unconscious at her home in Atlanta, the 22-year-old has passed away after her family made the difficult decision to take her off life support back in June. The shocking loss comes a mere three years after her mother died.

A statement released by the Houston family confirming the news reads, “Bobbi Kristina Brown passed away July, 26 2015, surrounded by her family. She is finally at peace in the arms of God. We want to again thank everyone for their tremendous amount of love and support during these last few months."

Bobbi Kristina's father Bobby Brown also released a statement on Monday mourning the loss of his daughter. "Krissy was an angel and I'm completely numb at this time," the 46-year-old singer said. "My family must find a way to live with her in spirit and honor her memory. Our loss is unimaginable. We thank everyone for the prayers for Krissy and our family as we mourn my baby girl."

The young star’s family has held a vigil at her bedside since January 31, when boyfriend Nick Gordon discovered Bobbi face down in her bathtub. She was rushed to a local Atlanta hospital where doctors placed her in an induced coma. At that time, her father Bobby Brown and grandmother Cissy Houston thanked well-wishers for their support and asked for privacy and prayers. “I'm asking everyone just pray to the Lord who we know can do something. If he does a miracle, thank God. If it happens the other way, I'm alright," said Cissy.

Whitney’s sister, Pat Houston, announced shortly after Bobbi was moved to a hospice in June that, “despite the great medical care at numerous facilities, [her] condition has continued to deteriorate. As of today, she has been moved into hospice care. We thank everyone for their support and prayers. She is in God’s hands now.” 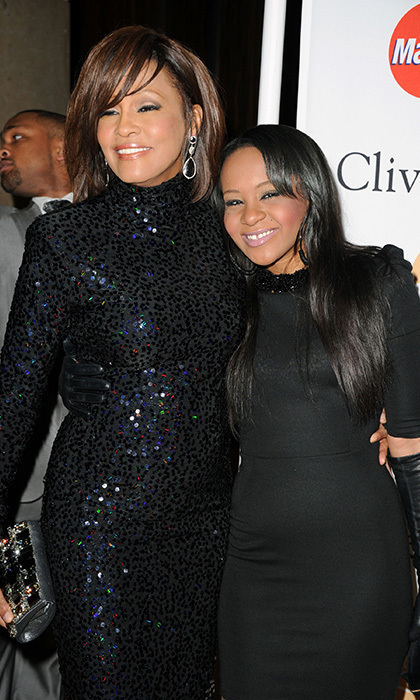 Bobbi Kristina was heartbroken after her mother's sudden death in 2012 Photo: Getty Images

On February 11, 2012, Bobbi's mother Whitney, 48, was found submerged in the bath of her Beverly Hilton Hotel hours before she was due to attend a pre-Grammy party. The cause of death was attributed to drowning – but heart disease and the star's struggles with substance abuse were also cited as contributing factors.

As Whitney’s only child, Bobbi and her mother had shared a fiercely strong bond. “I’m doing the best I can be,” a heartbroken Bobbi told Oprah Winfrey shortly after her mother’s passing. “Her spirit is still strong. She wasn’t only a mother, she was a best friend.”

Funeral arrangements have yet to be announced.