Carpool karaoke went rock 'n roll on Tuesday night. Late Late Night Show host James Corden invited rockstar Rod Stewart along for the ride as he made his way to work in his Range Rover. In the clip, the 36-year-old late night talk can't contain his excitement over having the 70-year-old legend in his passenger seat. 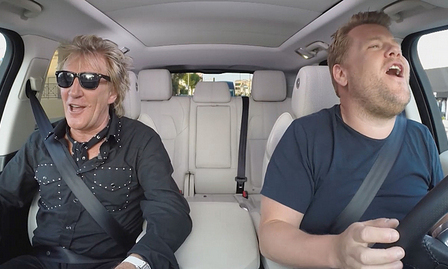 The musical legend admitted to the host that other than “shagging,” his band was infamous for destroying hotel rooms in the 70s. “In those days, the only ones who were doing it were The Faces and The Who, and mostly it came around because we weren’t getting the respect that we deserved. We paid for hotel rooms and we didn’t get room service. We just didn’t get any respect.”

After one of the most epic in car guitar solos, the comedian turned on rapper A$AP Rocky’s single “Everyday,” which samples Rod’s 1970s hit “In a Broken Dream.” After Rod sings the first hook, the rapper appears in the backseat and does a verse from the single off his latest album.

"I don't know if I've ever felt as cool as I do in this moment, right now, in my life. I genuinely don't," screamed the comedian as he drove along and jammed out with the rapper and the rockstar. “To be in a car, in L.A. with Rod Stewart and A$AP Rocky, this is the greatest thing I’ve ever done.”

James ended his ride with one of Rod’s biggest hits, “If You Think I’m Sexy,” where another driver spotted the duo getting down in the car. Rod isn’t the first musician to appear in the Carpool Karaoke series. Justin Bieber, Iggy Azalea and Mariah Carey have jammed alongside the talk show host.