The turnout at the Lancome 80th anniversary party on Tuesday night was so spectacular that the red carpet looked more like the Academy Awards. Everyone from Julia Roberts to Penelope Cruz, Kate Winslet to Lupita Nyong'o joined forces to fête the cosmetics brand's landmark birthday.

CLICK ON PHOTO FOR MORE PICS FROM THE PARTY 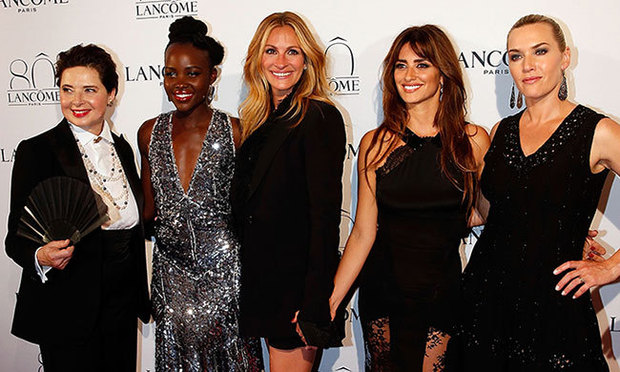 The atmosphere was heating up, literally, on the humid night in Paris with hosts Lancome handing out fans as guests arrived. As radiant Isabella introduced each ambassador on to the stage, all of them – particularly Lupita – got a very enthusiastic reception, but the biggest cheer of the night was reserved for Julia, who was the last to appear.

Kylie Minogue performed a rousing set, speaking to the audience in both English and French, and performing her hits "Spinning Around" and "Wow." The Australian pop star really got the place moving, including stunning Penelope. Clearly a Kylie fan, she was spotted dancing and singing along to the pop dance tunes.

Meanwhile, Titanic star Kate stayed closed to her husband, Ned Rocknroll, nephew of Sir Richard Branson. “They looked very loved-up,” said a guest. “They spent a lot of time together, just the two of them.”

Mingling with the starry sextet of Lancôme 'faces' – Isabella, Lupita, Julia, Penelope, Kate and Lily – were guests including Chrissy Teigen, who attended the party with her singer husband John Legend. TheSports Illustratedmodel showed off her famous figure in a black dress with a neckline split to the navel.

And it's proving to be a busy week for Chrissy, who attended the star-studded Vogue party the previous evening as part of Paris Haute Couture Week.

The City of Light has seen a host of top fashionistas descend on the capital to watch the world's biggest couture houses, including Atelier Versace, Chanel and Christian Dior, unveil their exclusive new couture collections.

And the star action wasn't just in the front rows – Julianne Moore and some star offspring, such as Johnny Depp’s 16-year-old daughter Lily-Rose Depp and Gabriel-Kane Day Lewis, the 20-year-old son of Oscar winner Daniel Day Lewis, made catwalk appearances.