Nine years of wedded bliss! Nicole Kidman and Keith Urban celebrated their wedding anniversary on Thursday. The pair kissed and cuddled their way through a video Keith shared on Twitter, filmed after the musician had played a concert in Mt. Pleasant, Michigan.

The singer took the chance to thank his fans for helping the couple celebrate their special day, confessing that he struggled "to hold back tears" after seeing so many signs wishing him and his wife a happy anniversary. "We just came off stage in Mt. Pleasant, Michigan and it was..." Keith began, seemingly struggling to find the right words to describe the experience. Nicole comes to his rescue, calling the gig "amazing." 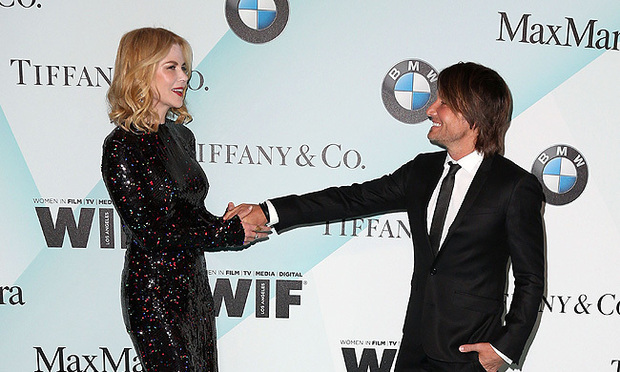 
"So fun," he agrees, adding: "It's our anniversary tonight and everyone had signs wishing us a happy anniversary - you have no idea how touching that is. I mean, literally, I was trying to hold tears back - it was so beautiful, they were everywhere," he continues in the video, which seems to have been filmed in the back of a car.

"We were both so grateful, so thank you very much to everyone who came out tonight and made it magical, celestial and so romantic, it was beautiful."

He continues: "And we should come back here every anniversary and play," drawing laughs from Nicole. "But I loved, it and I hope you guys did too. See you soon," are his parting comments before Nicole blows a kiss to the camera and shares a smooch with her man.

Hi everyone! We just came off stage in Mt. Pleasant, Michigan.... We should come back here every anniversary!!! - KU https://t.co/tBqsiTbGgR


The emotional concert was clearly the perfect end to a great day – which appeared to have started with family time. Nicole posted a rare photograph on Facebook of the couple with their daughters Sunday Rose, 6, and 4-year-old Faith Margaret enveloped in a family hug.

In the candid photograph the Australia actress was wearing the same sheer top she can be seen wearing in the video, though Keith had a costume change for the concert.


The Australian couple’s relationship has only become stronger since they wed in 2006 in Sydney. Like any couple they have endured tough times – last year was particularly hard for the actress after her father died suddenly – but any hardships have clearly only served to strengthen their bond.