Kim Kardashian made her first public appearance since revealing she's pregnant with her second child on Monday evening, stepping out with husband Kanye West for the 2015 CFDA Fashion Awards in New York. The reality TV star, who was glowing in a sheer custom Proenza Schouler gown that didn't reveal any signs of a baby bump just yet, exclaimed "Date night!" on Instagram, where she posted a photo of herself with Kanye walking the red carpet. 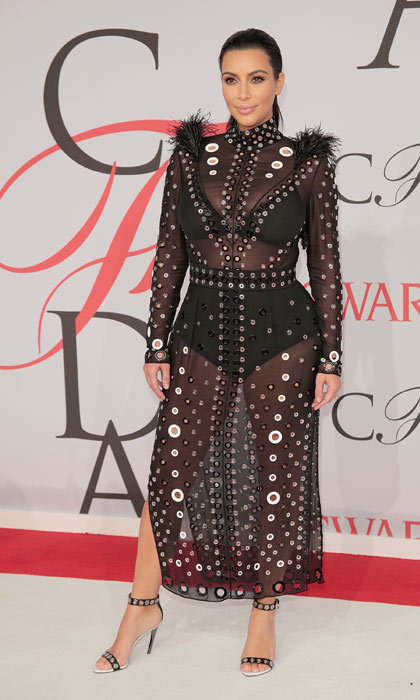 Kim stepped out for the first time since breaking the news of her second pregnancy Photo: Getty Images

While she's not quite showing, Kim has already begun to suffer the side effects of early pregnancy. "To be honest, I've had really bad morning sickness, day sickness, night sickness. I can barely get out of bed," she told Us Weekly.

But despite feeling unwell, Kim is nothing but thrilled and grateful for the pregnancy after longtime efforts to give their almost 2-year-old daughter North a sibling. 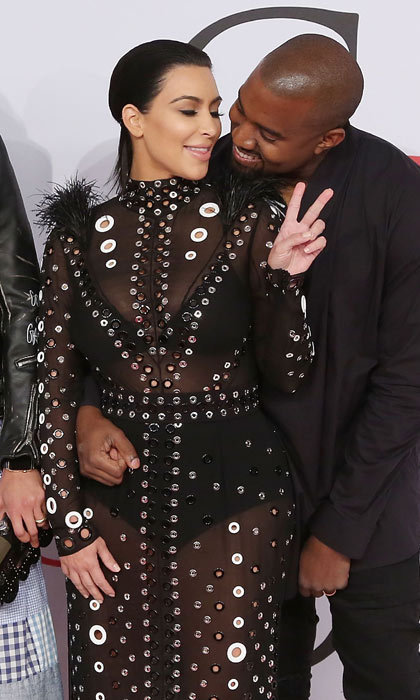 
"It's a very different type of pregnancy from my first one, but I'm so grateful to be pregnant when we didn't even think it was going to happen for us," she said. "I don't care how sick I am."

Kim made the announcement about the long-awaited, happy news in a teaser for an episode of Keeping Up with the Kardashians. In Sunday night's clip, Kim is seen receiving news that she's pregnant during an appointment with her doctor.

She then tells sister Khloe: "I just got the blood test back, and I am pregnant!"

Kim's appearance at the star-studded CDFA Fashion Awards came hours after her step-parent, formerly known as Bruce Jenner, made her debut as a woman, Caitlyn Jenner, on the cover of Vanity Fair magazine.

Supportive Kim revealed the moment she shared the magazine cover with her family via a mobile phone message, and her brother Rob's reaction to the news, to Access Hollywood Live.

"I've been on the phone maybe five different times today sending it to all the family members," she explained. "It was so funny because all the girls – we knew Caitlyn was shooting this, but my brother had no idea."

The brunette continued: "So I sent it on a mass text to everybody and my brother was on it, and he goes, 'Kim, why are you sending me this? Who is this woman and why do I care.'