It was, in Reese Witherspoon's own words, the "best girls night of the year" – and fans of the 1999 hit film Cruel Intentions would surely agree. On Thursday evening, Reese reunited with the movie co-stars Selma Blair and Sarah Michelle Gellar for a fun evening out together in Los Angeles. In fact, Selma and Sarah Michelle were enjoying the reunion so much, they even relived their infamous lip-lock from the movie in a picture captured by actor Brad Everett Young.


The trio found the perfect setting for their get together: attending a performance of Cruel Intentions the Musical at Rockwell Table & Stage in Los Feliz. Selma shared a snap of the ladies in an up close selfie during the performance and they couldn't stop taking photos throughout. As they sipped their martinis, they were all mouthing the lines along with the performers. Reese even brought goodies for the actors – boxes of candy.


It has been 16 years since Reese, Selma and Sarah appeared as Annette Hargove, Cecile Caldwell and Kathryn Merteuil respectively in the teen adaptation of the 1792 novel Les Liaisons Dangereuses, which also starred Reese's now ex-husband Ryan Phillippe as Sebastian Valmont.

While Ryan was absent from this week's reunion, all three ladies took to social media to share their excitement about the girls night. Coincidentally, the evening also marked the 49th birthday of Cruel Intentions director Roger Krumble, who blew out candles on a cake brought out for him. 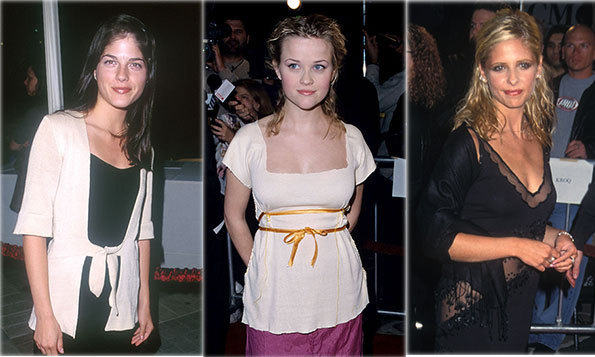 Selma, Reese and Sarah back in 1999, when Cruel Intentions premiered Photos: Getty Images

Of course, all three actresses have come a long way since Cruel Intentions. Oscar-winner Reese can currently be seen in the comedy Hot Pursuit opposite Sofia Vergara and is set to play Tinkerbell in Tink, a live Disney- action film.

Sarah will next act in the second season of Disney XD's Star Wars Rebels alongside her husband Freddie Prinze Jr., while Selma is filming her new role as Kris Jenner in the FX series American Crime Story, based on the OJ Simpson trial.

The trio enjoy their ladies' night out Photo: Instagram/@sarahmgellar

Last week was actually the second time that Sarah had been to the Cruel Intentions musical, as she also had a front row seat for the April 11 show. Just a few days later, Ryan went along to watch the parody and posed with cast members backstage.

This isn't the only 90s reunion that Sarah has had lately. Over the weekend, the actress caught up with her former Buffy The Vampire Slayer co-star Alyson Hannigan to celebrate the third birthday of Alyson's daughter Keeva.