Rumer Willis danced her way to victory on Season 20 of Dancing With the Stars. On Tuesday's finale, after impressing viewers and judges all season, the Mirrorball Trophy went to her and partner Val Chmerkovskiy. As her name was called out, "Team Rumer," which included mom Demi Moore and dad Bruce Willis, erupted with joy.

Younger sisters Tallulah and Scout jumped up and down hugging each other when the winner was revealed. The 60-year-old Die Hard star was accompanied by his wife Emma Heming, who also appeared to share a brief moment of celebration with Demi.

"It's incredible. I never thought in a million years I'd be capable of doing something like this," Rumer said on Wednesday's Good Morning America.

In her and Val's final turn on the dance floor, they executed a flawless foxtrot/paso doble routine that earned them yet another perfect score. "She was so excited to do this show," Val added on GMA. "She was genuinely enthusiastic about the process. Ten weeks later, we've got a trophy." Val and Rumer wowed judges and viewers throughout the season Photo: Twitter/@DancingABC

On Tuesday, her fellow competitors hoisted the triumphant duo on to their shoulders. Host Tom Bergeron said, "This is usually when I ask how they feel. You know, are they happy. I think so." 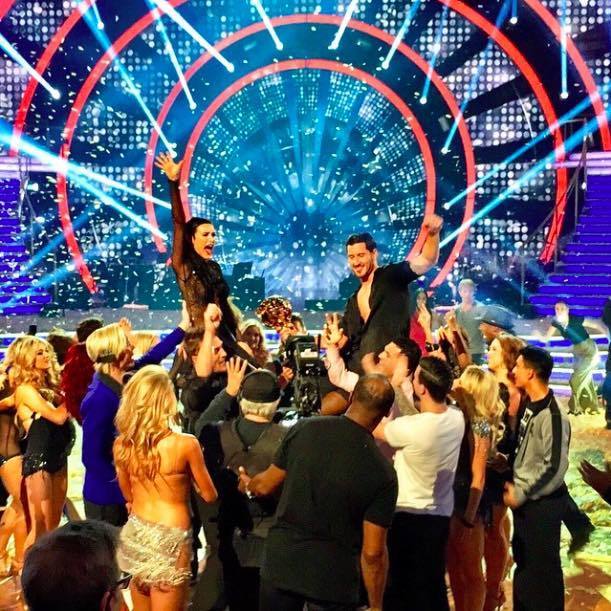 Rumer and Val were lifted in the air after winning 'Dancing With the Stars' Tuesday Photo: Instagram/@dancingabc

Rumer had a formidable roll call of celebrity supporters including her former stepfather Ashton Kutcher who talked of his pride on his Facebook page. He wrote, "We are so proud of you Rumer!" and then shared her voting information.

After the show, the singer-actress was full of praise for her mother. "To have such incredible support, especially from my mom who rallied everyone, I feel so grateful," she shared with People. "It means so much."

However, it was the fans that really showed her the love, with a group of them making a social media account to back Rumer. They also continued to vote for the striking brunette, impressed by her grace, work ethic and honesty in admitting her insecurities.

Ladies and gentlemen, the champ is here!