Formula 1 heiress Tamara Ecclestone's daughter Sophia was made to feel like a little princess as she celebrated her first birthday in style wearing head-to-toe Dior, frolicking with a zebra foal and getting a puppy of her very own.

The 30 guests to her west London home were greeted by a four foot castle cake with the centerpiece being a large numerical '1' festooned with dozens of pale-pink roses.

Tamara and her husband, property developer Jay Rutland, chose to decorate the "pink palace" marquee with pictures documenting Sophia's first year, while a giant portrait of the birthday girl looking down on the guests hung from the center of the ceiling. 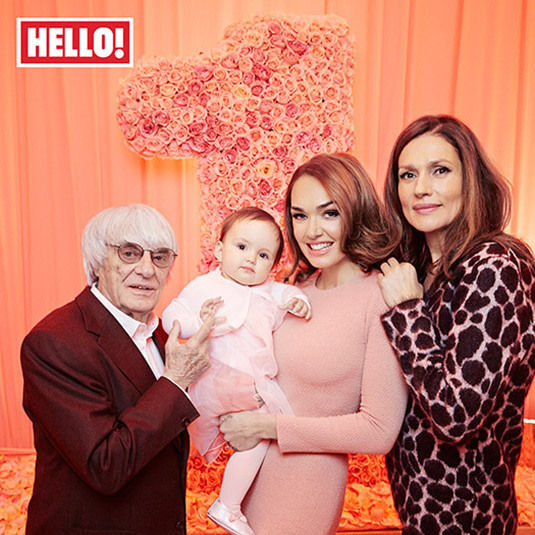 "We got her a Cavalier King Charles spaniel called Lady and a Build-A-Bear, which Jay and I recorded our voices in, so she can keep it forever," Tamara, 30, the British model and reality TV star, told Rosie Nixon, editor of our sister publication in the UK, HELLO! magazine.

Tamara's father Bernie, chief executive of the Formula One Group, attended the March 17 celebration, where children were entertained by a zebra foal, three lambs and two miniature Shetland ponies.

"I'm proud of my daughters and what beautiful granddaughters they have produced. And we are soon to be more," he said, referring to younger daughter Petra's pregnancy.

"We are lucky," said Tamara of the celebration for her first child. "I just think it’s nice for a girl to have a memory of a fairy princess party. One is such an incredible milestone."

Her mother Slavica, a former Armani model from Croatia,said, "Tamara is such a hands-on mother, she likes to do everything for her — I'm hardly needed."

Have a Nook? To read more about the party and see exclusive photos download the latest issue of HELLO!