Lady Gaga is limbering up for the performance of a lifetime as she prepares to take the stage at the 2015 Oscars. The singer has been keeping fans updated with her preparations for the performance, including a challenging session of "swimming pool yoga" on Thursday.

"What a wonderful day, Swimming Pool Yoga!" she wrote on Instagram, alongside a picture of herself and a friend practicing yoga poses on a board in a swimming pool.

Lady Gaga is a yoga devotee and often shares pictures of herself working out with her 5.7 million Instagram followers. When the singer is not working out, she has been busy rehearsing for her Oscars performance, and told fans "Rehearsal is a beautiful sacred space" and that she was "so excited" for Sunday. She even had a special visitor on Wednesday as Dawn Hudson, the CEO of Academy Awards dropped by to watch her rehearsals.

"I'm so honoured Dawn Hudson, the CEO of Academy Awards, came by rehearsal today. It was such a wonderful surprise and I am so grateful for her support and the love of Craig and Neil during this beautiful process. It's going to be an amazing show!" she wrote. 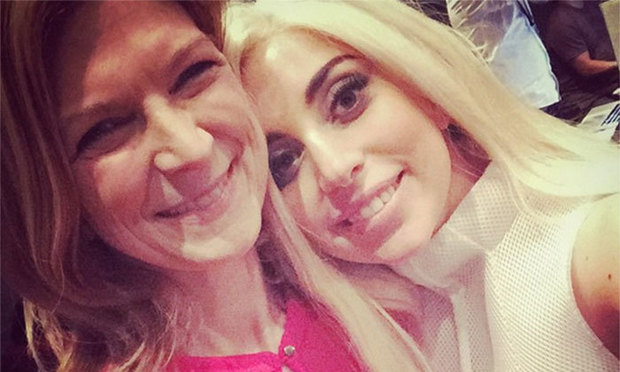 The singer is currently rehearsing for her performance at the Oscars

It has been an incredible week for the 28-year-old star, because she also announced her engagement to her long-term love Taylor Kinney on Monday. The pop star and her actor boyfriend got engaged on Valentine's Day, before celebrating with her family in her father's Italian restaurant in New York City.

Gaga announced the news by posting a snap of her stunning diamond-encrusted heart-shaped ring on Instagram, captioning the picture: "He gave me his heart on Valentine's Day, and I said YES!"

The couple met on the set of Lady Gaga's You & I music video in 2011, but didn't start dating until a few months later.