Back at philanthropic work one month after giving birth to the first Clinton grandchild, Chelsea Clinton publicly expressed her happiness at having a healthy baby and enjoying her first weeks of motherhood. 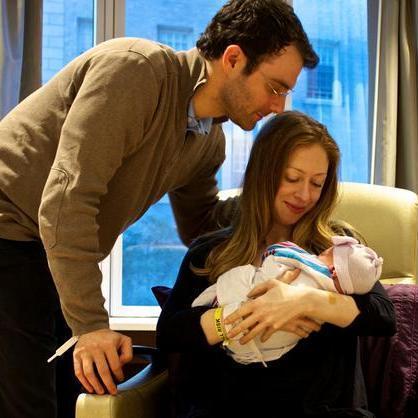 The 34-year-old new mom spoke out on Twitter during a virtual chat with model Christy Turlington Burns about the state of maternal health around the globe.

“Grateful 2 have this precious time w Charlotte & that she is a healthy baby!” Chelsea tweeted on Wednesday.

Clinton and husband Marc Mezvinsky welcomed their daughter on September 26. "Marc and I are full of love, awe and gratitude as we celebrate the birth of our daughter, Charlotte Clinton Mezvinsky," Chelsea tweeted after the birth.

The former first daughter joined Christy, founder of Every Mother Counts, a non-profit organization dedicated to making pregnancy and childbirth safe for every mother.

Christy set up the organization following the birth of her first child as she suffered from an unexpected postpartum hemorrhage. Her recovery was the result of a quick response from an efficient medical team. But Christy then wondered about women who do not have access to this healthcare and took action.

“We are sisters in motherhood,” states Burns. “When a child is born, a mother is also born.”

The pair discussed a range of issues in the Twitter dialogue including universal healthcare and dealing with Ebola in Africa.