While shooting the breeze with Conan O’Brien on Tuesday night, new dad Ashton Kutcher gushed about fatherhood and how he and Mila Kunis picked their daughter’s adorable name.

"We were going to a Lakers game and I've got name Tourette's," Ashton explained. "I just started listing off anything and everything that I saw. I was like, 'Sign! Truck! Wall! Door!' She's like, 'Shut up!' I'm like, 'If you don't accept my bad ideas, you'll never accept the good ones.' Then I was like, 'All right I've got a really dumb idea. What about Wyatt?' She goes, 'That's it.' I was like, 'Really? I did it?' She was like, 'Yeah, that's it.'" 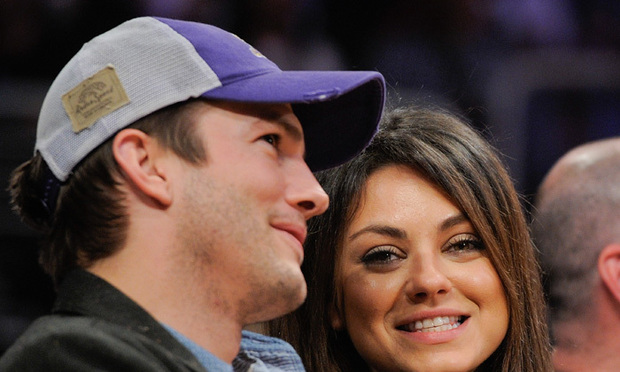 "We gave her the middle name Isabelle after Mila's grandfather," he added, "so it has a little heritage." Mila’s grandfather's name was Yitzhak, which is Hebrew for Isaac. It is a Jewish custom to use the initial of a beloved deceased relative to name one's child.

During his Conan appearance, the 36-year-old actor admitted that being a dad is “the greatest thing on earth.”

"As soon as this child was born I immediately wanted to call my parents and just apologize because I never knew how much they loved me. It's absolutely, insanely…" he trailed off.

While some parents celebrate their child’s birth by opening a savings account in their name or buying stocks, the engaged pair began protecting little Wyatt’s identity.

Their daughter is also getting a taste of the finer things in life at a young age. Forget sippy cups and airplane spoons, the new parents brought their three-week-old daughter Wyatt with them to a fancy ten-course dinner on Monday night.

"They came in and did the chef's tasting," a fellow dinner at The Gadarene Swine in Studio City told People. "It was a ten-course tasting meal. They came in and gave the chef a hug. They seemed to enjoy themselves."

According to the onlooker, Mila, 31, and Ashton, 36, who welcomed their daughter on October 1, appeared completely at ease in their new roles. "They were happy," the source added. "They were laughing the whole time."