As the big day draws near for George Clooney and Amal Alamuddin, key details about their Italian wedding – including the venue, the dress, the guest list and, of course, the date – have reportedly been revealed.

The couple, who are expected to tie the knot at the end of this month in Venice, have been famously tight-lipped about their nuptials, but several sources have nonetheless spilled the beans on the A-list affair.

On Sept. 26, the pair will reportedly host a “casual,” pre-wedding dinner at the Hotel Cipriani, one of the world’s most expensive hotels, where rates start at $1,400 a night.

The wedding itself is said to be taking place the next day at the stunning 13th century castle Ca’ Farsetti, with just 60 guests in attendance and Italian lawyer, journalist and politician Walter Veltroni officiating the ceremony. 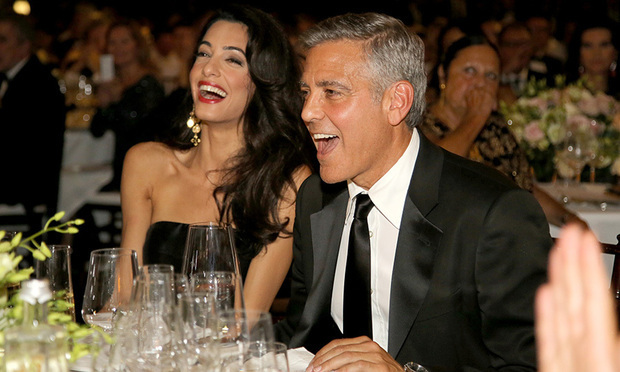 Matt Damon and his wife Luciana are expected to be there, along with best man Rande Gerber and his wife, Cindy Crawford. There’s been no word yet on whether newlyweds Angelina Jolie and Brad Pitt will attend.

Amal’s younger sister, Tala, will be the British lawyer’s maid of honour. As for the dress, speculation runs rampant – Amal, 36, was spotted at Alexander McQueen just last week, but other sources claim she will walk down the aisle in Oscar de la Renta.

After the ceremony, guests will head over to the Aman Canal Grande Venice hotel - located inside the 16th century Palace Palazzo Papadopoli and boasts sweeping views of the canals - for a lavish reception.

Opera singer Andrea Bocelli is said to be performing, while guests dine on an array of Italian and Lebanese dishes.

Neither bride nor groom has confirmed any of the specific details, but one thing is for certain: George Clooney is crazy about his future wife.

The star made an emotional speech at a Celebrity Fight Night in Florence last week, in which the 53-year-old actor couldn't help but gush about his beautiful fiancée.

"In closing, I would just like to say to my bride-to-be, Amal, that I love you very much,” said George. “And I can't wait to be your husband.”