It looks like some of Hollywood wants in on Jennifer Lawrence and Amy Schumer's BFF squad! Veteran actress Jane Fonda opened up in the newest edition of Vanity Fair magazine about being jealous of the comedian and Oscar-winner's friendship. 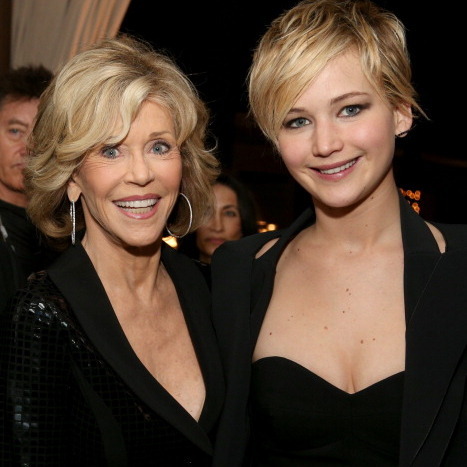 "I told her, when I heard that she called Amy Schumer and said 'I'm in love with you,' I felt so jealous," The 78-year-old Frankie and Grace star dished to the magazine. Jane had nothing but great things to say about the 25-year-old Joy star, noting that there aren't many people in the limelight like her.

"For me, she's the real deal," she says. "There's very few that come along like that, I'm just mesmerized by her."

The two-time Oscar winner appears on the cover of Vanity Fair's 2016 Hollywood Issue with Jennifer Lawrence, Cate Blanchett, and How to Get Away with Murder's Viola Davis.


"Could these women be any more impressive? Introducing Vanity Fair's 2016 Hollywood cover," the magazine captioned the cover photo on Instagram, shot by famed photographer Annie Leibovitz, in part.

With the amount of girl power in the three page spread, it's no surprise that Jane opened up about the role feminism has played in her decades long career in show business. "We still have a long way to go, only we're talking about it now" she dished. "If you had asked me even 10 years ago, at 78 would I still be working, I'd have said, 'You're out of your mind.'"