No photoshop here! Tennis star Rafael Nadal is showing off his athletic physique in the latest Tommy Hilfiger campaign. The 29-year-old is flaunting his abs in the name of fashion and posing in navy blue boxer briefs for the iconic brand's newest underwear ad.

The new star of #TommyHilfiger underwear takes it all off. #RafaelNadal #TommyXNadal

The label caused a social media frenzy among fans after they shared the first image of the tennis champion posing for the campaign. "The new star of #TommyHilfiger underwear takes it all off. #RafaelNadal #TommyXNadal," read the caption alongside the snap. The 64-year-old designer also put rumors to rest that the athlete was photoshopped in the images. "He's not doctored up, that's the real guy," he told WWD.

As for why Tommy decided to have a sportsman rather than a model fronting the new campaign he shared, "Because we're so global now, Rafael Nadal resonates globally in most countries in the world. He also looks amazing in the underwear and the clothes." 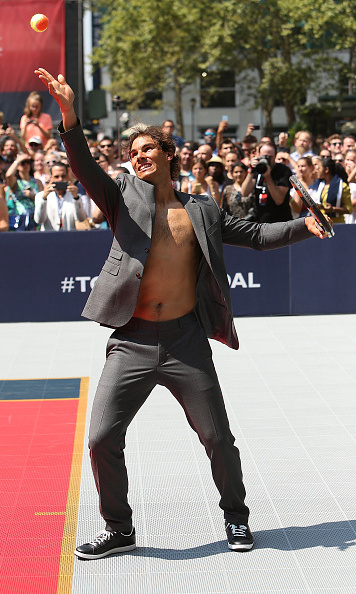 On Tuesday, Rafael showed off exactly how he looks in the brand as he played some friendly tennis matches against some of the biggest names in fashion. As part of the brands campaign reveal, the tennis star beat Arthur Kulkov, Hannah Davis, Noah Mills and Constance Jablonski in New York City's Bryant Park, in front of famous spectators that included Chanel Iman, Lake Bell and Glee's Jane Lynch, who served as referee for the games.

With souring temperatures in the high 80s, as Rafael continued to move around the court, his clothes made their way to the floor. Serving in just a jacket and suit pants, he also gave fans a glimpse at his toned stomach. 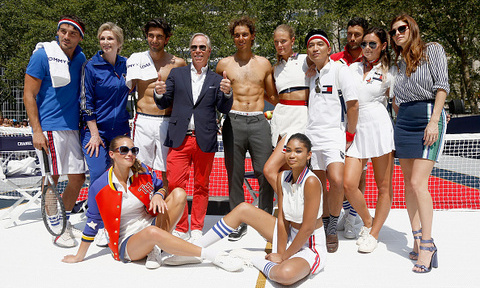 Tommy and Rafael with the well-known attendees during the matches Photo: Getty Images

The brand is no stranger to celebrity faces, with Kendall Jenner walking in one of their biggest shows last year. One additional lady Tommy wishes to have joining his Hilfiger family is Pippa Middleton. He told HELLO! at an event in June, "She’s a candidate."

This isn't the first time that Rafael has lent his good looks to a high fashion brand. Back in 2011, the sportsman showed off his modelling credentials when he posed in adverts for Emporio Armani Underwear and Armani Jeans alongside Hollywood actress Megan Fox.