All the stars ARRIVED at the 2019 Met Gala. The theme of the night was "Camp: Notes on Fashion," and you might be wondering why Lady Gaga had four outfit changes and none of them included a sleeping bag or tent - it wasn't that kind of camping, people. Inspired by the 1964 Susan Sontag essay in which she writes "the essence of Camp is its love of the unnatural: of artifice and exaggeration," this camp is all about theatrics. Every A-lister rocked the most outlandish looks while walking the swanky pink carpet, but the "camp" theme continued at the after-parties. One specific after party, hosted by Kim Kardashian and Serena Williams, saw more wild looks, crazy hairdos and McDonald's fries.

Taking place in New York's City buzzy nightclub Up&Down, the after-party featured many A-listers rocking new looks. After the Met Gala, Kim changed from her wet, nude dress into a bright turquoise mini dress. The sparkly getup had matching gloves, shoes and a mesh cutout near the belly button area. The reality star also chose to don a silver wig for the ocassion.

The other hostess Serena decided to take off the bottom half of her Met Gala gown and wear short shorts to the after-party. However, the tennis player kept her neon Off White sneakers. At the party, Kendall Jenner and Hailey Bieber were spotted dancing and singing along to songs, while a pink grizzly bear walked around handing out McDonald's fries. 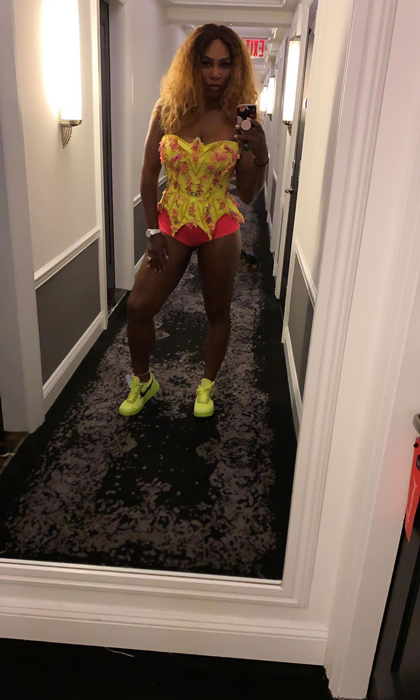 Other A-listers that attended the star-studded affair were Kylie Jenner, Gigi and Bella Hadid, Jared Leto and Katy Perry.

In other Met Gala news, did you see all the cute couples that turned up the PDA at the pink carpet?